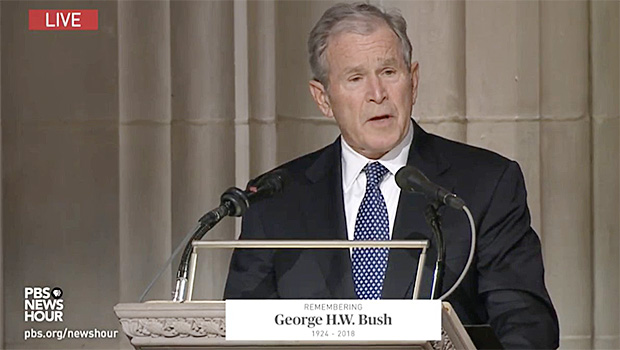 Former President George W. Bush delivered a beautiful eulogy at his father, George H.W. Bush’s funeral on Dec 5, letting the world know how remarkable he thought his dad was. Watch it here.

From the first line of his eulogy, you knew it was going to be good: “The idea is to die young as late as possible.” It’s been a hard year for George W. Bush. The former president has not only had to lay his beloved mother to rest in July, but just months later, must do the same for his father, former president George H.W. Bush. Bush was selected to deliver the eulogy at the funeral, as he did for the late senator John McCain in August. He shared stories about his father’s penchant for “off-color” jokes with his friends, his love for life, and how he “had two settings: full throttle and sleep.”

Bush said that his father taught him how to be a wonderful, supportive father, even though he wasn’t perfect. “His short game was lousy,” he joked. “He wasn’t exactly Fred Astaire on the dance floor, and he didn’t eat vegetables.” Tearing up at the end, he called him “the best father a son or daughter could have.” He said he knew that he was in heaven, holding his mom’s hand and hugging his late sister, Robin Bush. “Dad’s life was constructive. He taught us how to grow with humor and kindness.”

Bush refrained from getting explicitly political in his eulogy aside from touting his father’s decades of service. There weren’t any pointed jabs at President Donald Trump, as he subtly snuck into his eulogy for McCain earlier this year. Praising the senator, who he said put country before party, Bush said, “He was honorable, always recognizing that his opponents were still patriots and human beings. He loved freedom with the passion of a man who knew its absence. He respected the dignity inherent in every life…a dignity that does not stop at borders… he detested abuse of power.” The speech came in the midst of Trump’s attacks on migrants at the southern US border, including separating children from their families and imprisoning them in shelters.

Our thoughts are with the former president, and the rest of his family, as they mourn the sad loss of George H.W. Bush. May he rest in peace.