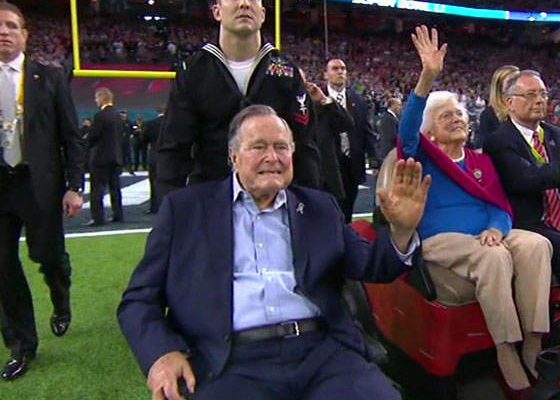 The 41st U.S. president, George Herbert Walker Bush died at his home in Houston, Texas last night, according to the New York Times. He was 94. George’s death came only eight months after the death of his wife of 73 years, Barbara Bush, back in April.

As CBS News points out, Bush had all sorts of health problems and a day after Barbara Bush was buried, he had to be taken to the hospital.

Bush was hospitalized the day after the funeral to be treated for an infection in his bloodstream. He suffered a number of health issues in his later years, including vascular parkinsonism, a condition similar to Parkinson’s disease, and used a wheelchair to get around.

George, who is also responsible for giving us the 43rd U.S. President George W. Bush, was the son of Senator Prescott Bush and born rich. He was a graduate of Phillips Academy in Massachusetts and Yale University. After a failed presidential campaign in 1980, H.W. took the White House in 1988, defeating Michael Dukakis. Bush also pulled off something that hadn’t been done by a president since President Martin Van Buren in 1836 – he was elected to the White House while serving as the Vice-President. He was also only the second person in U.S. history to watch his son take the White House (George W. in 2000). He only served one term after losing the presidency to Bill Clinton.

Every internet site that exists has covered what Bush did during his reign as Vice-President, President and beyond (like the war in Iraq, ignoring the AIDS crisis for years and the assault allegations), but since this is Dlisted, let’s remember the time he got into a feud with The Simpsons. In 1990, Barbara Bush told People that The Simpsons was the dumbest thing she’s ever seen, and two years later during his re-election campaign, Bush said that he’d like to keep strengethening America and make families more like the Waltons instead of The Simpsons. This is was The Simpsons’ response, which took 4 years since this episode aired in 1996.

The Simpsons have yet to comment on the death of George H.W. Bush, but keep your eyes on Bart’s chalkboard, because I’m sure it’s coming.