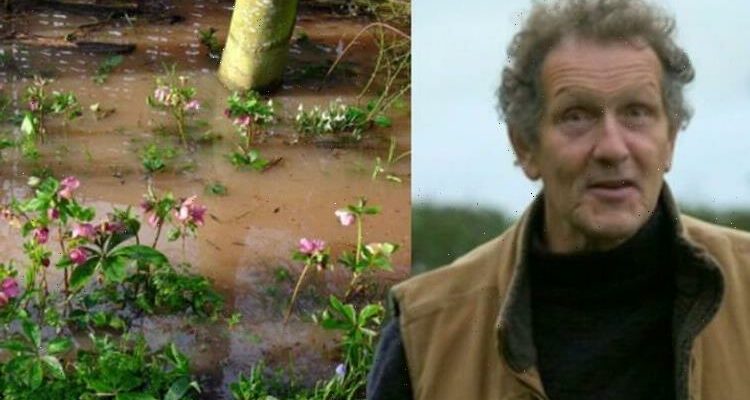 Gardeners’ World host Monty Don worried his followers on Instagram today as he posted a photo of the flooding he was experiencing at his Longmeadow garden. It comes as Storm Eunice battered the country leaving many without power last week.

In view of his 997k followers, Monty reassured everyone that the damage was nothing he had not overcome before – plus, some of the plants seemed to like it.

The 66-year-old posted a photo of the normally picturesque land which had turned into a bog, covered in muddy water but with flowers peeking through.

“Big flood – but we have had them many times before – and the hellebores don’t seem to mind,” he wrote.

Lots of his followers simply replied with shocked face emojis.

“Hope nothing damaged too much,” added Jane.

Cosyhouseliving penned: “Nature is so strong.”

In a video posted later on, Monty’s adorable dog can be seen jumping around in the water with joy before shaking herself dry as the presenter wrote: “Floods can be good fun!”

Last week, Monty tweeted to say his watermeadows were also flooding – but that he didn’t mind at all.

“I welcome this – not least because the accompanying birds are so fabulous – and it does no harm to the garden,” he wrote.

Longmeadow is private land Monty and his wife Sarah purchased back in 1991, and it often features on Gardeners’ World.

It is split into themed sections – the Cottage Garden, Jewel Garden, Paradise Garden and Vegetable Garden.

In just the Cottage Garden, there are more than 50 kinds of shrub roses in the summer.

Monty previously spoke to The English Home about the place he’s lived for more than 30 years.

“I live near a little town called Leominster in Herefordshire, near the Welsh border,” he explained.

“We moved here 30 years ago because it was sufficiently far from London to be outside any commuter belt, and therefore affordable, and because my wife Sarah’s parents and her extended family lived in this part of the country.”

He described his home as a Tudor oak-beamed hall house with 10 workrooms and studios.

For the couple, it is more of a creative space than somewhere to host guests.

The home was in a state of ruin when it was bought and it took a whole decade to tidy it up – so it’s no wonder Monty says he wouldn’t change a thing about it.