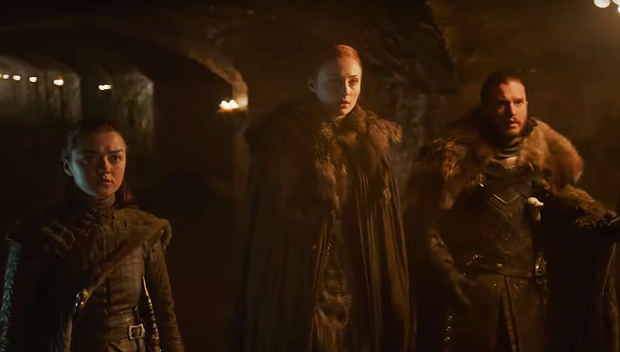 The first teaser for ‘Game of Thrones’ season 8 debuted right before the ‘True Detective,’ and we will truly never recover. The Great War is ahead, so start preparing yourselves now. Also, we know the premiere date!

The final season of Game of Thrones will premiere April 14. The first teaser features Jon Snow, Sansa, Arya walking through the Crypts of Winterfell. As they make their way through the crypts, they come upon stone statues of themselves. Does this mean Jon Snow, Sansa, and Arya are going to die?! Stone statues are only made for the dead. Suddenly, Jon Snow’s fire goes out. They pull out their swords as winter makes is way amidst the crypt. The Night King is coming, people.

HBO teased the reveal of the premiere date via Twitter on Jan. 11. The network’s Twitter accounted posted a photo that featured “texts” between “HBO” and “Boss.” When HBO asked when the final season of Game of Thrones would be premiering, the Boss replied: “You can find out on Sunday before True Detective.” Before that, all fans knew was that season 8 would be airing in April 2019.

The first footage of season 8 was unveiled during the 2019 Golden Globes in an HBO preview. In the brief scene, Sansa and Daenerys meet for the very first time. “Winterfell is yours, Your Grace,” a stone cold Sansa says to Daenerys, who is standing next to Jon Snow. Daenerys and Jon were last seen traveling north to Winterfell, so it looks like they’ve made it there safe and sound.

HBO chief Richard Plepler is one of the very few people to have seen all 6 episodes of the final season. “It’s a spectacle. The guys have done six movies. The reaction I had while watching them was, ‘I’m watching a movie,’“ Richard told our sister site Variety. The final season is going to blow our minds, and we’re going to be there for every step of this amazing last ride.