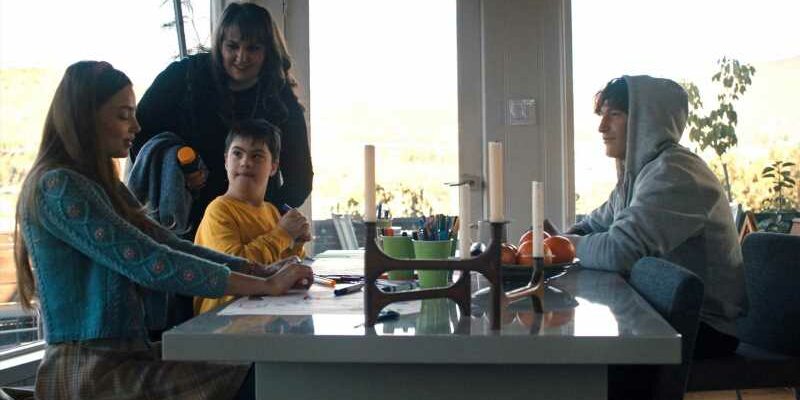 Early in Lena Dunham’s bittersweet Sharp Stick, which goes wide this week, two young women are treated, yet again, to their origin stories. Their mother, Marilyn (Jennifer Jason Leigh), believes in ritual. Treina (Taylour Paige) is the biological daughter of a stranger Marilyn met and befriended some years ago, who ran away with a Scientologist after giving birth, leaving the thirtysomething Marilyn — whose own chances at pregnancy were thought to be slim — to care for the young woman she’d grow to call her daughter. Sarah Jo (Kristine Froseth), meanwhile, was the product of a fling with a handsome personal trainer named Roy — a short story for a short relationship. “It’s best just to keep it us three,” Marilyn says.

Lena Dunham Is Back — and Yes, This Movie's Sort of About Her Too

RS Recommends: 5 Devices You Need to Set Up Your Smart Home

Meet the Beatle: A Guide to Ringo Starr's Solo Career in 20 Songs

The details are lovingly grotesque. Marilyn spins a tale of a seductive Los Angeles, with its ghoulish men and their chodes and big houses, its chance encounters and attractive possibilities. Most urgently, she makes the circumstances of each daughter’s birth feel special, a bedtime story that they can return to repeatedly, the bedrock that makes this off-kilter crew, with their mix of races (Treina is black, Marilyn and Sarah Jo white) and personalities and their loose, conversational freedom, feel coherent, destined, whole. In short, like a family.

Sharp Stick is Dunham’s second feature, and already, within its first handful of scenes, we’re plunged into the familiar markers of the writer-director’s style: the endearing annoyingness, the mix of self-effacement and utter lack of self-awareness, the flaws seemingly tattooed onto characters’ foreheads, the knowing attention to how individuals talk and think, even at their most thoughtless. Dunham is of course more than a writer, director, and showrunner. HBO’s Girls rendered her into a phenomenon that was bigger than any one work in large part because of a style that seemed to cut dangerously close to the woman herself. Any feelings about the work bled, unobstructed, into feelings about Dunham, not merely the artist, but the person. What makes Dunham’s art worth watching is what makes so much of it feel like a gamble. It invites projection. Hear Dunham, playing a character, say she wants to be a “voice of my generation” and assess accordingly — you can’t help it, even knowing the artist’s knack for wry, funny embellishment, even recognizing the self-laceration that’s barely scabbed over. The work seems to dare audiences, particularly Dunham’s peers, to pour salt into the wound. So they do.

Sharp Stick is hardly a film by an artist who’s in the clear, culturally — and it’s a better movie for embracing vulnerability anyway, whether the knives out or not. You can feel it wandering through its unknowns with care (it’s hard not to recall the conversations surrounding Girls and its awkward handling of race when confronted with a white heroine whose sister is black sister, for example, and the movie seems to know as much) while doubling down on the confusion and imperfection that lend it its most concrete ideas, the flaws that make its characters annoyingly, sometimes unappealingly, human.

Sharp Stick is primarily a film about Sarah Jo, a 26-year-old caretaker with scars on her belly from the hysterectomy she had when she was very young — a procedure that’s left her out of the loop in terms of sex, though not because she lacks for desire. Early on, during a video call for a class with other caretakers, we see her expounding on how much she loves her current assignment while, under the table, she’s fingering her scar. As played by Froseth, Sarah Jo is as bright and affable and (accordingly) seemingly out of place as her name suggests, like a creature from another planet or another time, too unblemished to be human, too flower-power to be 21st-century. Compare her to her mother, with her legacy of breakups and absent men, or her sister, who’s dating a guy that she’ll be head over heels for until she isn’t, which is how crushes work.

Sarah’s attention is on Josh (Jon Bernthal), the father of the young man that Sarah Jo cares for during the day. It isn’t a spoiler to say that Sarah Jo talks Josh into an affair, sex with the babysitter being the trope that it is. What can’t be spoiled is the icky, fruitful, complicated morass of feelings and ideas Dunham threads through this affair. It wouldn’t be reality if Josh were perfect. True to form for a work by Dunham, Josh believes himself to be a loser. Maybe he is. Regardless, he signals as much from the start. When Sarah Jo comes onto him, it’s almost an affront: Bernthal plays this man with enough jocular boyishness that when a younger woman treats him like the older man, like an adult, it’s as if he doesn’t know what to do with himself.

There’s a lot to explore in that gap, the fissure between between who we are and who we’re thought to be, and Sharp Stick homes in unabashedly, if with great care. You can tell that Josh senses some misalignment between what Sarah Jo seems to have imagined him to be (a man who’s hot for “being a man,” being a good father and husband) and the man that he might actually be (a stay-at-home dad, married to a wife with money, who gets away with indiscretions because he’s a “good guy”; a man who needs to grow up, on the one hand, but whose good qualities as a father spring from exactly this flaw, on the other). But he dives in anyway, partially because it’s sex, but maybe most of all because he loves the idea of whatever it is Sarah Jo believes him to be.

Before Josh leans into the good fortune of it all, before he and Sarah Jo have sex, he tries to assure her that he isn’t the kind of man she wants to have sex with for the first time, as if this were an esteemed position that he doesn’t deserve. But Sarah Jo’s on her own planet — and, if anything, her assertiveness about her own flaws, such as the scar on her belly, is more forward an act than Josh could ever muster. As with so much else for Sarah Jo, the sex, when they finally have it, feels like a fantasy, even when Josh proves himself to be something of a two-pump chump, at first. Dunham films their sex scenes with an eye for wish-fulfillment: It looks great even when it’s just OK; it’s worth remembering even when, in the scheme of things, it isn’t memorable. This is sex from Sarah Jo’s perspective: amazing because she somehow doesn’t know better. That is, until she knows better.

Dunham characters are often aware of the pitfalls that await their personalities. They fuck up anyway. You can especially feel this balance being worked out in a character played by Dunham herself (again, true to form): Josh’s wife, Heather, whose short-tempered frustrations seem excessive until we learn what it is that makes the vibe in their household feel a little anxious. Life isn’t fair. It’s an old lesson, and in Sharp Stick, you can feel it playing out between men and women, particularly in the attitudes of the other women in Sarah Jo’s life, who play at cynicism toward the endeavor but cannot help but seem a little hopeful regardless. You can see the world this movie has made, full of counterpoints to Sarah Jo’s persistent sense of fantasy-romance, with signs everywhere telling Sarah Jo to grow up, that Santa Claus isn’t real.

She has to learn this for herself. But Sharp Stick isn’t here to punish her. Its lessons are more gradual, even optimistic. We look out at the world for models of how to be, even — especially? — if our purview is a bubble. One of the most curious absences in Sarah Jo’s personality is a sense of how she could have survived until 26 thinking that one gives a blowjob by, literally, blowing on a penis — especially when she grew up in a home with a sexually active sister and a mother whose romantic life has been a revolving door. This question doesn’t point to a flaw in the movie. It winds up being one of its most intriguing mysteries, a question that Froseth’s wide-eyed kidult vibe teases at and breaks open without the actress breaking so much as a sweat.

Sharp Stick is an empowerment story, but its characters are more playfully imperfect and humorous than that label often seems to allow. The inner child is always there, with Sarah Jo; it’s a part of the package. It’s funny. This is a woman who makes an alphabetized checklist of sexual goals out of construction paper and hangs it on her bedroom wall — whose hot streak of sexual interactions starts off in a plainly transactional mode, with her wanting to cut down on the small talk and just skip ahead to the fucking. In this sense, some of the men in Sharp Stick prove surprising. The people in this film who do “bad” things aren’t bad people — if anything, they come off as individuals who aren’t fully formed. Its sincerest, grandest trick is in giving us a heroine who only seems to need to grow up more than everyone else. In fact, they are all the same. Sharp Stick loves them anyway.