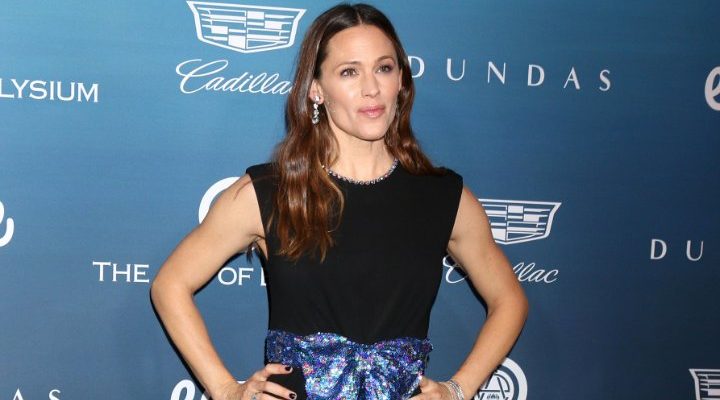 AceShowbiz –Jennifer Garner has been rumored dating John Miller for several months, but only now they’re pictured in affectionate mode. The couple was caught on camera packing on the PDA during a romantic date last month before Christmas, on December 22.

In the pictures obtained by Daily Mail, the two were snuggling while on a balcony decorated with Christmas lamps. The photos were reportedly taken at a home in the Pacific Palisades. In one snap, Jennifer was seen tenderly embracing John from behind and kissing his shoulder.

An eyewitness said, “Jennifer got a little frisky at one point playfully sliding her hand across John’s leg and grabbing his crotch as she walked past him.” They were also seen chatting while standing together on the balcony.

The “Alias” alum wore a cozy cream long-sleeved sweater on top and a flirty black miniskirt with pearl beading around the hemline that made her look younger than her age. Her boyfriend, meanwhile, wore a gray long-sleeve shirt and dark pants.

Jennifer and John, the CEO of a financial holding company, reportedly started dating in the spring of 2018, though the news only broke in October. “They’ve been together six months – and it’s getting pretty serious,” a source told Us Weekly magazine at the time.

In December, it was reported that the “Peppermint” star wanted to slow things down with her beau because she’s not ready for a “deeply committed” relationship. A source told ET Online that the 46-year-old actress wanted to channel her time and energy for her family instead, as her “children, career and Ben [Affleck] are her main focus at the moment and she is not ready for anything too serious.”

“She enjoys her time with John but she has concerns of moving too quickly because she doesn’t want to be disappointed,” the source explained, adding that her friends were fully supportive of her decision.

The PDA pics appear to tell otherwise as Jennifer didn’t seem to restrain herself from showing her love for John. The pair, however, still keep their relationship out of the public eye.