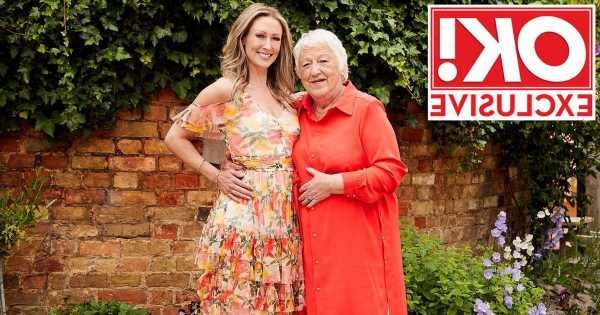 When Steps star Faye Tozer and her mum Dorothy arrive at our exclusive photoshoot, it’s one of just a handful of occasions they’ve been able to meet up in the past year. Faye’s eyes well with tears as she recalls their first hug after months apart: “We both had lumps in our throats, didn’t we mum?”

“It was amazing,” says Dorothy. “It’s a reminder of how important family is.”

“I had a scan last year due to respiratory problems and they discovered a growing cancer on the left lung, then a smaller, different cancer on the right lung,” she tell us, jokingly adding: “I like to go the whole hog!”

Dorothy had an operation to remove the cancer in the left lung in March. Then last week, she underwent CyberKnife treatment, a robotic radiotherapy procedure, to tackle the cancer in the right lung. Faye says they feel fortunate that the disease was “caught at the right time” and that Dorothy was in the hands of incredible doctors and nurses at Harefield and Luton and Dunstable University hospitals.

“We were panicking, because of the extra worry of being in hospital during the pandemic,” says Faye. “But even with appointments being delayed, they prioritised mum when they needed to. They were confident that mum had a bit more time after the first operation before they had to act on the second lung.”

Now they’re both hopeful for the future. “Doctors have said, ‘We can treat it – but it might not kill it,’” says Dorothy. “But they might be having me back for more treatment as the years go on.” Now that restrictions are easing, former Strictly Come Dancing contestant Faye is returning to performing – and wants her parents to be in the audience when she appears in Singin’ In The Rain at the Sadler’s Wells theatre this month.

Faye, who lives in South Tyneside with her husband Michael and son Benjamin, 12, also has a new Steps album and a tour planned for later in the year. Here, Faye and Dorothy chat to OK! about the devastating diagnosis, getting back on stage and why Steps are stronger than ever…

It must have been a shock to receive the diagnosis…

Faye: It was so disheartening because mum was coming to the end of the breast cancer treatment. It was like, “Oh my goodness, we’ve got another challenge.” I think anything to do with lung cancer just sounds scary. But mum’s treatment has been brilliant. CyberKnife sounds like something out of Star Trek. They can pinpoint exactly where you need the radiotherapy, and it means she doesn’t have to go through chemotherapy and the side effects. Mum gave up smoking on the spot. Dorothy: When my surgeon agreed to operate, I gave up on that day after decades.

And how are you feeling now, Dorothy?

Dorothy: I feel like what choice have I got? I know the doctors are working hard to look after me. I can find breathing a bit difficult sometimes, but I have a breathing spray and Faye bought me a Komuso breathing necklace, which helps calm your breath.

Faye: If they can keep it under control – and you behave yourself mum! – it looks really hopeful that you can live with it. It’s an amazing result and we are so grateful to all the medical staff. That’s good to hear.

And Faye, you’ve got lots to keep your mind occupied…

Faye: I’m in Singin’ In The Rain from 30 July to 5 September. Then Steps are releasing our What The Future Holds Part 2 album straight after that. Hopefully we’ll be able to do some TV performances and potentially some gigs – we’ll see what Boris Johnson decides. Then we’ll be starting our Steps rehearsals for our UK arena tour in November, and the day after that I’ll be rehearsing for panto in Darlington! Busy!

Faye: We recorded a couple of music videos which was amazing. We hired our own crew and TV studios, and we did some live performances to put out on social media. We’ve had some amazing responses from fans saying, “Thank you for keeping us going,” but it kept us going as well to be honest. I’d have gone stir crazy if I didn’t have that to do. It’s been so rewarding for us.

Singin’ In The Rain is a special musical for you, isn’t it?

Faye: I rang mum and I was like, “Guess what? They’ve asked me to do Singin’ In The Rain again!” It’s quite cute because Benjamin and I always sing Good Morning from Singin’ In The Rain to each other in the mornings – we started that when he was little because I was in the musical at that time.

Faye: It’s one of my favourite musical theatre productions. The music is so joyous, and there are colourful costumes and massive dance numbers. I’m playing Lina – and I get the most fabulous costumes – and my track is different to the rest of the cast. When the music comes on, I get to stand by the side of the stage and soak up this amazing energy.

Faye: I’m going to have to rely on FaceTime with my boys. When I first heard about Singin’ In The Rain, I came downstairs to tell Benjamin and said, “I’m really excited but are you going to be OK?” And the first thing he said was, “Don’t worry, I’ll look after dad and the dog, it’s fine!” I told him that I meant whether he could cope if I’m not at home!

Dorothy, how do you feel when you’re watching Faye in productions like this?

Dorothy: You have to see whatever it is twice. The first time is to make sure they’re in the right spot at the right time and know their words. The second time you can sit back and relax. Faye: I’m 45 years old and mum is still my biggest critic and biggest fan!

Sadly, it’s been a really tough time for the theatre industry…

Faye: It really has. It was a massive shock to be so unsupported as an industry but we’re a resilient lot and we will come back stronger. I know there is going to be a lot of theatres that are dark now because of this but we’ll get there.

You’ll be appearing alongside Kevin Clifton, another former Strictly star…

Faye: I love him, he’s an all-rounder. He’s so talented, funny and sweet. I think he’s going to make the most awesome Cosmo Brown – his character has that slapstick comedy. It’s a really gruelling part but Kevin’s going to be amazing.

Dorothy, did you always think that Faye was destined for showbusiness?

Dorothy: It was something that she always wanted to do. We did talk her into staying on at school and doing her A-levels just in case she wanted to go to university at a later date. It can be a very short life in showbusiness.

Faye: And mum spent a lot of money on dance classes and taking me to and from practice!

The reception to Steps has been so warm since your reunion, hasn’t it?

Faye: We still find it quite surprising and never take anything for granted. We didn’t expect to be releasing or making new music – that wasn’t on the cards. But when we came back with the Tears On The Dancefloor album in 2017, that was amazing. We’ve got some amazing writers working with us and just the prospect of doing a massive arena tour is something we wouldn’t have predicted back in 1997 when we did 5, 6, 7, 8. It’s 24 years since the band launched.

What’s the secret to your longevity?

Faye: It’s going to be our 25th anniversary in May. We were a novelty one-hit wonder type thing – that’s what we were put together for. And now we have six original albums under our belt with a real plethora of different styles and songs. I think it’s being people’s guilty pleasure, which is lovely. Lucky us.

Faye: Yes, it’s Naturana’s new Sisterhood Bra collection in collaboration with the Future Dreams cancer charity. For every bra sold for someone without breast cancer, they donate a post-surgery bra to someone who has had a mastectomy or other breast cancer surgery. It’s all about women supporting women. And as someone who’s been there, I’d like to remind everyone to keep checking their breasts and be body aware – if it’s caught early it can be treated.

It sounds like you’ve gone from being in lockdown to being super busy!

Faye: I’m so grateful. My work and career are definitely what I live for, it brings me so much joy. I’m so lucky that I’ve had an interesting career. You never know when it’s going to end and I want to embrace all these wonderful opportunities.