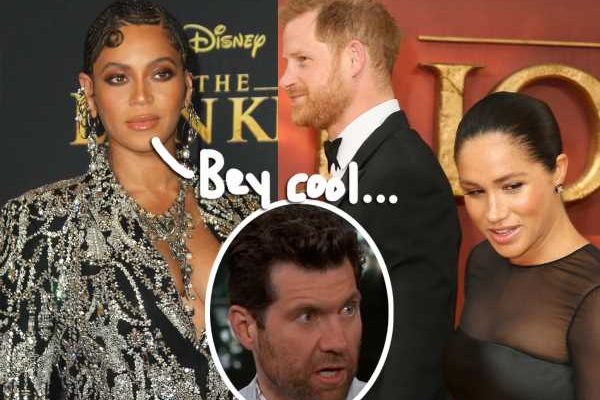 We weren’t at all surprised to hear Billy Eichner was freaking out before meeting Prince Harry and Meghan Markle at The Lion King’s *royal* premiere in London on Sunday.

But according to the actor, the entire cast was “kind of nervous” about the meet and greet — even American royalty herself, Beyoncé Knowles-Carter!

Eichner recounted the royal experience during his Thursday night appearance on Jimmy Kimmel Live, where he admitted every one of the film’s stars was starstruck by the Duke and Duchess of Sussex. He said:

“We were all kind of nervous, even Beyoncé.”

We guess if there was ever a time for the icon to experience such an emotion, it would be meeting the royal couple.

Especially since, as Eichner pointed out, meeting the pair came with a series of strict guidelines the stars were sent a few days before the premiere. He explained:

“In the days leading up to you, they email you a protocol of how you’re supposed to greet Prince Harry and Meghan and they’re very intense about it.”

The actor, who plays Timon in the upcoming film, said the list of rules included referring to Prince Harry and Markle as “Your royal highness,” waiting to speak until you are giving them a handshake, and having plus ones stand behind you — unless your plus one is JAY-Z, probably.

“My friend couldn’t speak unless he was spoken to… I was like, ‘Does that same rule apply to JAY-Z? I don’t think so.’”

Actually, Hova completely abided by the guidelines when he and Bey greeted Meg and Harry.

As for Billy, he naturally “completely freaked out” when he met the couple, but, fortunately, he said the Duke and Duchess were “very very nice and totally chill and down to earth and lovely,” adding they were “beautiful-looking” people.

He also had a weirdly casual conversation with the former Suits actress about their acting teachers in college.

“Meghan and I went to the same college in Northwestern. We were both theater majors. I didn’t know her when we were theater. So we had this strange conversation about our acting teachers.”

Common ground is always the perfect subject for royal chit-chat!

When Bey and Jay met with Meg and Harry, the foursome had an engaging conversation about being parents. Thankfully, Yoncé kept it cool as well and, from what we could tell, her alter ego Sasha Fierce did not have to come out at any point to take over.

Ch-ch-check out Billy’s interview (below) to hear him talk more about meeting the royals, how he feels about officially having a song with Beyoncé, and why he’s upset Taylor Swift didn’t ask him to star in her gay icon-filled You Need to Calm Down music video!