Last year, the Jimmy Kimmel-hosted Primetime Emmys was the first major awards show to pull off a ceremony during the pandemic with all nominees featured remotely. This year, only “a handful” of the nominees will be beamed into the show via satellite, said Ian Stewart who, along with Reginald Hudlin, executive produced the well received virtual 2020 Emmys on ABC and also executive produce the 2021 awards on CBS, which will be held Sunday in an air-conditioned tent on The Event Deck at L.A. Live with limited, vaccinated audience sitting at dinner tables.

Hosting the Emmys this year is Cedric the Entertainer, star of CBS’ comedy series The Neighborhood. “He has extraordinary versatility — whether it’s comedy, whether it’s music, whether its drama, he can do it all,” Hudlin said. “What we want to do across the show is to feature his full range of talents.”

That will start right away. The ceremony will kick off with an opening number that “is going to be a lot of people participating, singing, rapping,” Stewart said. “It’s hopefully going to be a very impactful start, a ton of fun.”

Cedric the Entertainer is part of the opening number, “And he’s got lots of friends,” Steward added. “I think you will recognize a lot of people.”

While he would not reveal more details about the Cedric & Friends number, Stewart promised it will be short. 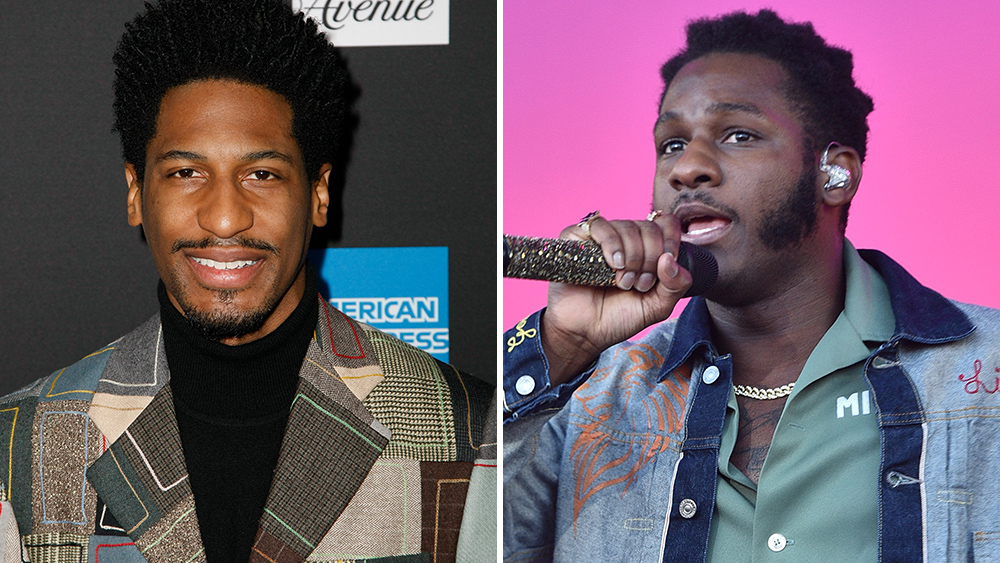 In another highlight, “We are going to have another powerful music performance this year for In Memoriam,” Hudlin said of the recently announced collaboration between Leon Bridges and Jon Batiste. “We were fortunate enough to get both Leon Bridges and Jon Batiste, both of them amazing artists in their own right; it turns out they are best friends.”

The duo will team up to perform a “moving and powerful song,” Hudlin added, noting that “the song is a classic.”

Stewart provided a clue: “I’m not suggesting you drink necessarily but if you were ever a little drunk at 2 AM, you’ve probably sang it.”

In the days leading to the Emmy ceremony, the TV industry lost two big names, Michael K. Williams and Norm Macdonald. There won’t be special tributes for them during the show, the EPs said.

“There are so many people that we love that we lost this last year, and the only way to deal with it is to treat everyone fairly and equally because they are all magnificent talents that made such a huge impact on our industry,” Hudlin said.

The Emmys is the first major awards show to require vaccinations for all attendees, but Hudlin said there hasn’t been any backlash against the mandate among the nominees.

“In fact it’s been the opposite,” he said. “People are so enthusiastic about attending, particularly since we limited the number of tickets available, they get snatched right way; it’s very much like a Willy Wonka golden ticket.”

Added Stewart: “There is an option to come in remotely if you don’t feel comfortable. We haven’t gotten any pushback on that. We have some people who physically can’t be here so we try to include them as nominees but very few, a handful.”

The TV Academy last month further scaled back the audience at the Primetime Emmys by limiting the number of tickets to no more than four per nomination, leading to nominees in categories like Outstanding Program and Writing that often consist of large teams to not be able to attend.

“We wanted to be democratic, we wanted everybody to have their moment in the room, so we asked them to send their representatives that they chose between themselves,” Stewart said about how it is being decided which nominees from a show would attend. There will be no option for the rest to participate remotely.

The entire producing team of Netflix’s The Crown, a frontrunner in the Outstanding Drama Category, will have the opportunity to celebrate together should the show win for its fourth season.

“There is a party happening for The Crown in London,” Stewart said of the setup, reminiscent to the way nominated talent from several shows last year had huddled together in one private location each, including Schitt’s Creek and Watchmen.

Other British-based shows also are expected to have nominees at the London location, Hudlin said, calling the event there “a pretty fun shindig.” UK citizens are currently not allowed into the U.S. owing to Covid restrictions. 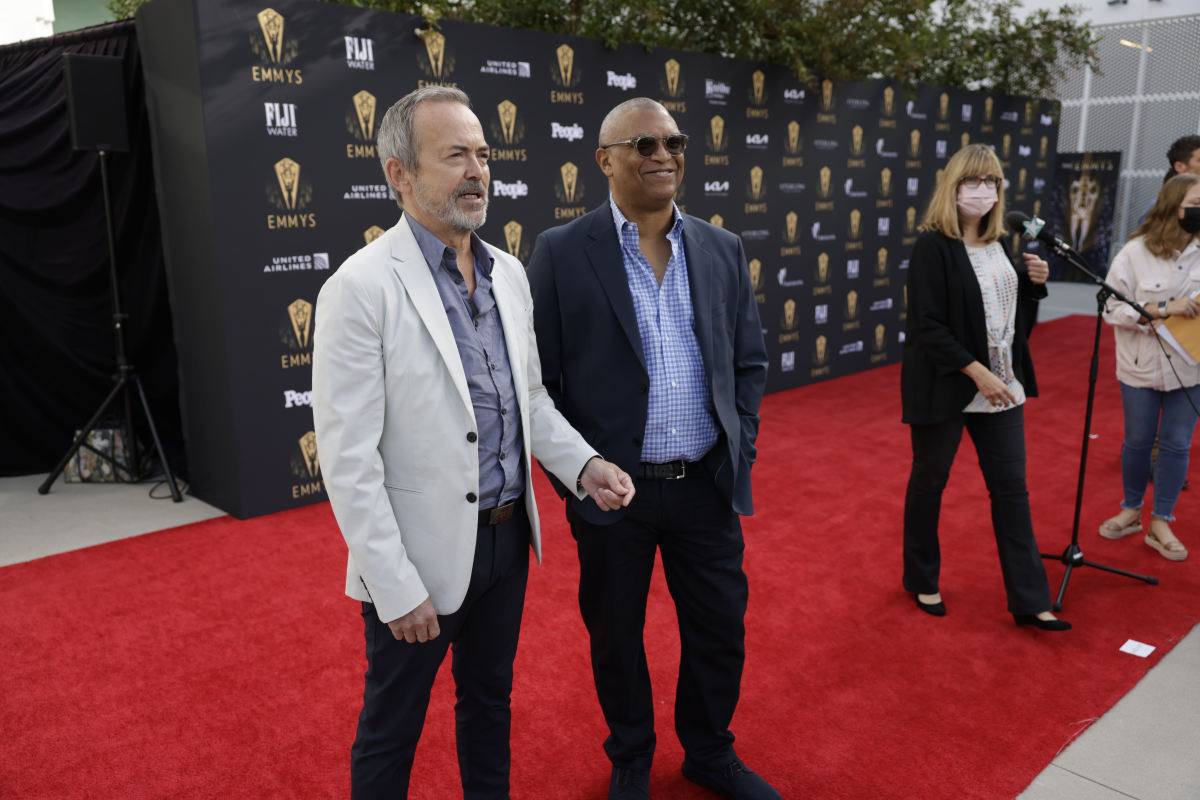 Stewart and Hudlin are promising a fun atmosphere at the main location in Downtown L.A., too, and to achieve it, they are ditching the traditional amphitheater seating for tables, a staple of the Golden Globes and SAG Awards, which also were employed by the Grammys and the Oscars during the pandemic this year.

“We have been able to do something that we have never been able to do but always wanted to do which is  to get away from that regimented seating, row upon row of them, and move into a table environment where we consume evening’s entertainment the way I assume you like to consuming yours. When we go to dinner we don’t sit in rows, we sit at a table, and we laugh, and we share the moment together,” Stewart said. “It’s going to be a little bit less ‘them and us,’ some person on the stage talking to rows and rows and rows of people, and people at home thinking, that’s not really for me because I’m not there. I think this time it’s going to be a celebration it’s going to be a party, it’s going to be joyous, with you watching at home and saying, damn I want to be there.”

The Emmys could use more viewers watching this year since the Emmys, along with the other major awards shows, were hit hard by the pandemic, hitting ratings lows. For CBS, linear numbers will be less important since, for the first time, the Emmys are being simulcast on a broadcast network and a major streamer, Paramount+, so signups and streaming viewership will be a major part of evaluating the telecast’s performance.

Unlike the Oscars and the Grammys, where the audience was so small that many nominees were ushered in and out, only allowed in the room for their category, all Emmy attendees who have tickets will be inside the tent for the duration.

“Our audience are all tested negative and vaccinated coming into the building,” Stewart said. “That gives us the freedom that they can be there and stay in the whole time, they are going to sit at their tables and enjoy the evening.”

The show, directed by Hamish Hamilton, who also helmed the 2020 Emmys, will employ two principal stages — one in the end and one in the middle of the tables — and other places around the venue.

While the show has a vaccination mandate for everyone attending, the topic of Covid vaccines won’t be brought up in the scripted part of the show outside of the acceptance speeches. There will be no politics either, and there has been no attempt to get President Joe Biden or Vice President Kamala Harris to appear.

“We love our folks in the White House, and we certainly support everything they are doing, but they are very busy actually running the country, we just focus on celebration,” Hudlin said.

Added Stewart, “The night is about television; we are not a political organization, people can say what they like when they on stage but we are completely agnostic.”

During rehearsals so far, there have been no positive Covid tests, Hudlin and Stewart said. The producers adopted Covid guidelines after discussions with the Los Angeles County Health Department, and they will stay intact through Sunday.

“We have implemented exactly what they have asked us to implement,” said Stewart, who admitted that he is tracking Los Angeles’ Covid cases daily. “Given the fact that Covid cases are tailing off slightly — or quite a lot in L.A. – I don’t see a reason for that to change.” 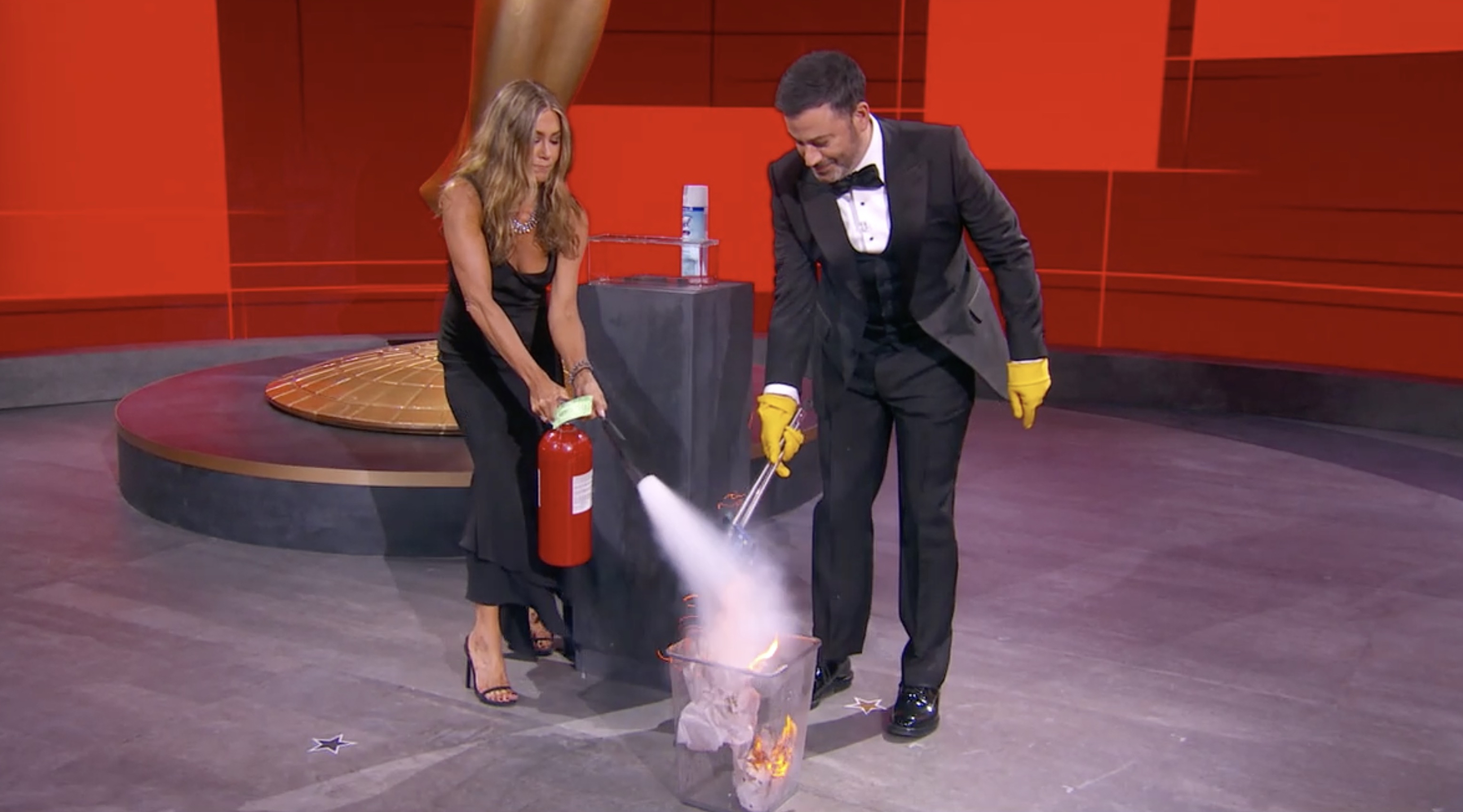 Following last year’s pre-taped fire extinguisher bit between Kimmel and Jennifer Aniston on the show, which Stewart admits “could’ve gotten out of control if we had done it live,” there will be “no fire this year, maybe ice,” Hudlin quipped.

Stewart reflected on the experience producing the Emmys last year that they bring to the 2021 Emmys. “We had so much fun last year, we were in a crisis situation and used it as an opportunity to try new things that had never been done in an award show, as they say, never let crisis go to waste,” he said. “This year is a different year. Even though the specter of the pandemic has not gone away, we are now in a different era with vaccinations, with testing so we can acknowledge where we are now which is that if you do it in a safe way, we can come together we can celebrate as one.”