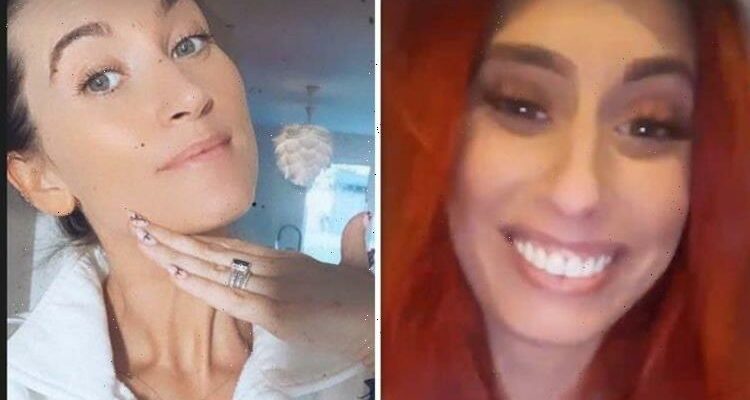 Charley Webb gets ‘Christmas pancakes’ with her children

Charley Webb, 33, who played Debbie Dingle in Emmerdale for 19 years, has reacted to fans comparing her to Loose Women panellist, Stacey Solomon, 32. The actress made the comments during a question-and-answer session on Instagram today.

One follower told the brunette that she is the “image of Stacey Solomon”.

Pleased with the comparison, whilst also being left slightly surprised by it, Charley responded with a smiling selfie and said: “That’s a new one.

“I wish I was as organised as well @staceysolomon.”

During the Q&A, Charley also set the record straight on her departure from Emmerdale after almost two decades on the ITV soap.

After much speculation, one fan asked whether she had officially left the show.

The 33-year-old replied: “This is always my most asked question.

“I’ve never answered it before because I’ve never wanted to make a big deal of it.

“I left to have Ace two years ago. I went back at the end of last year for 10 weeks to complete a storyline.

“So, I guess officially it’s been a year. I never felt the need to announce it, which is why we didn’t.”

She had appeared on the soap on and off since 2002, taking breaks when she had her children: Buster, 11, Bowie, five, and Ace, two, with her husband and fellow Emmerdale star Matthew Wolfenden, 41.

In July, a spokesperson for Emmerdale said there were “no plans” for her to return to the soap.

In the same month, her husband revealed that Covid restrictions had made filming tough and contributed to Charley’s decision to stay away.

He said on This Morning: “Everyone’s rallied round and made it what it is.

“But yeah. I think for her to go back now when all this is still happening is not what she wants to do.

“I think she’ll wait until all the restrictions have dropped.”

Talking about her hopes for the future, Charley told fans that she would like to set up her own acting school.

In her Instagram Q&A, she said: “It’s always something I’ve thought about but I’ve never quite got around to making it happen.