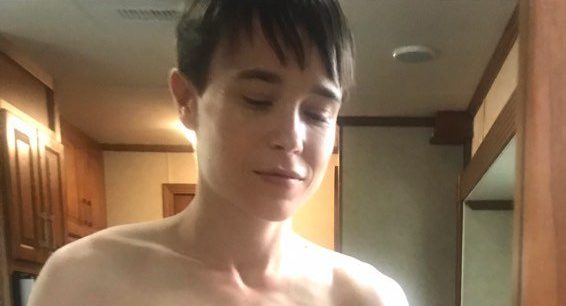 Elliot Page is clearly doing something right in the gym as the actor has revealed his impressively ripped torso in his latest selfie.

The Umbrella Academy star, who came out as transgender late last year, kicked off his weekend by sharing a shirtless photo to Instagram.

In the image, the 34-year-old is seen standing in front of a mirror wearing only a pair of black jeans, putting his fully-fledged six-pack on show.

It appears Elliot is posing in a trailer on-set but it’s not known exactly what project he’s currently working on. The Oscar-nominated actor currently has a few projects on the go, including TV show Ark: The Animated Series, Robodog and Naya Legend of the Golden Dolphin.

In May, Elliot was applauded for sharing his first shirtless photo after coming out as transgender in December last year.

The star, whose pronouns are he/they, previously opened up about his journey so far in an interview with Time.

Elliot shared that he feels ‘lucky’ to have ‘arrived at this place in my life’ and publicly showed support for the transgender community.

‘For a long time I could not even look at a photo of myself,’ he admitted as he revealed he used to suffer from anxiety, panic attacks and depression.

‘How to explain to people that even though [I was] an actor, just putting on a T-shirt cut for a woman would make me so unwell,’ Elliot added.

The X-Men actor came out as gay in 2014 and found love with ex-wife Emma Portner. They divorced in January this year.