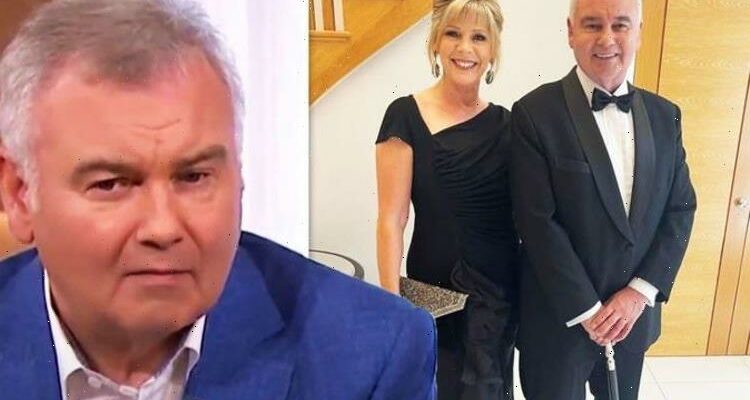 This Morning star Eamonn Holmes, 61, will be taking to the red carpet with the help of a cane this evening, as the TV presenter prepares to step out with his wife Ruth Langsford, 61, at the NTAs. The star-studded ceremony is being held at the O2 Arena in London, and a snap posted by Ruth revealed that the ITV duo are ready for the glamorous event.

Don’t scrub up too badly!!

In view of her one million followers, Ruth posted a snap of her and her husband of 11 years suited and booted, as they prepared to attend the glitzy event.

Ruth captioned the picture: “Don’t scrub up too badly!!

The snap showed the ITV couple dressed up to the nines and grinning from ear to ear in anticipation of the event.

Donning a slinky black number, Ruth showed off one side of her decolletage in a floor length dress, which features statement ruffles.

Giving off 007 vibes, Eamonn looked dashing in a suit and bow tie as he held onto a matching black cane.

The presenting duo are undoubtedly nervous, as the popular ITV show This Morning is up for nomination in the Daytime category, competing with The Repair Shop, Loose Women, and The Chase.

Eamonn and Ruth’s This Morning co-star Holly Willoughby has also been nominated in the TV Presenter category, alongside Piers Morgan, Ant and Dec, Bradley Walsh and Alison Hammond.

Irish native Eamonn revealed in April this year that he had been diagnosed with a dislocated pelvis and three slipped discs, which have been causing him increasing discomfort.

Since then, the star has been open about managing his chronic pain.

The NHS describes chronic pain as a persistent pain that carries on for longer than 12 weeks, despite the intervention of treatment.

Back in May, the star posted a candid video for his 744,000 Instagram followers to see, during which he admitted that he’d “lost nerves in his right leg” and was left unable to perform “certain actions.”

Despite having trouble walking, the star told wife Ruth on This Morning that moving around helps to alleviate the pain, revealing that his new attitude came after being given sage advice by a Hollywood star.

He said on the breakfast show: “I live by that motto, I do – don’t I always say that? Motion is your lotion.”

“I sat beside the actor Liam Neeson on a plane and he said to me, ‘Eamonn, remember this, motion is your lotion’.

“That’s what he said, he said to me that is why he keeps doing his action films,” Eamonn explained.

The star has now been battling chronic pain for months and has previously told how he has experienced difficulty sleeping, as his symptoms are worse when lying down.

In April, he tweeted:: “OK so body decided I was enjoying those 2 hours of sleep too much!

“Pain at its worst lying down. So anyone know how to sleep standing up? Just asking for a friend.”

Eamonn had questioned at 3am: “Well time to check in again… who’s not having a good night?”