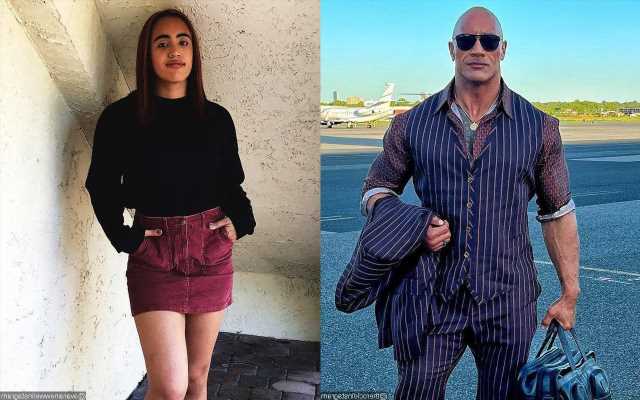 Simone, who is the fourth generation of her family to become a wrestler and signed to WWE in 2020, previously made use of her Twitter account to announce that Ava Raine is her WWE moniker.

AceShowbiz -Dwayne “The Rock” Johnson’s daughter Simone recently revealed that she would be making her big WWE debut as Ava Raine. However, some people were not happy with the 20-year-old’s moniker as it isn’t close to her father’s moniker.

The criticism didn’t go unnoticed by Simone as she responded to it in a series of tweets. “I probably sound like a broken record & hopefully this is the last i’ll mention this but i don’t understand why people being portrayed as separate individuals from their family name is such a heated topic,” so she tweeted. “A name doesn’t discredit any prior accomplishments from any family.”

Simone went on to say, “I could build my entire career around my father & people would still bash me anyway [shrug emoji].” In another post, Simone noted that she was “not trying to ignore or undermine all the sweet comments” from her supporters.

The fourth generation of her family to become a wrestler, Simone signed to WWE in 2020. She announced her WWE moniker on Twitter, where her handle is @AvaRaineWWE.

Meanwhile, in her own statement on WWE.com, Simone said, “It means the world to me.” She went on to say, “To know that my family has such a personal connection to wrestling is really special to me and I feel grateful to have the opportunity, not only to wrestle, but to carry on that legacy.”

Insisting that Simone “earned” her spot at the company’s developmental facility in Orlando, Florida, Paul “Triple H” Levesque, WWE’s Executive Vice President, Talent, Live Events and Creative said, “Simone Johnson’s unbridled passion and incredible drive has earned her a coveted spot training with the elite athletes from around the world at the WWE Performance Centre.”

He continued, “Not only does Simone now have an opportunity to cultivate and display her passion for WWE within the Performance Centre, but she’ll carry on the tradition of her incredible family lineage while creating her own impact as WWE’s first fourth generation Superstar.”