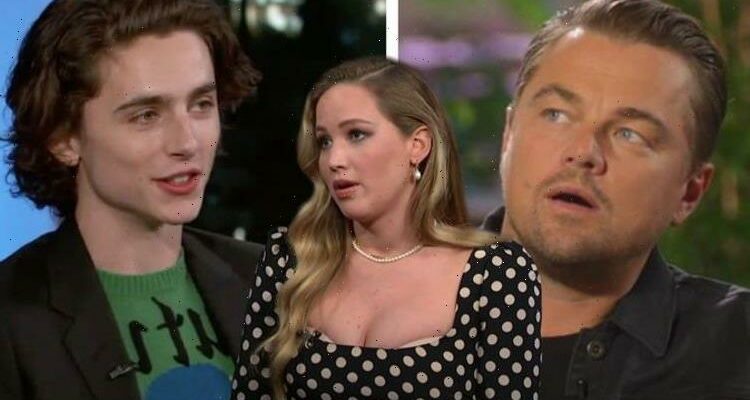 Don’t Look Up is set to drop on Netflix later this month, boasting a cast full to the brim with big names. And while she’s not looking up, Jennifer Lawrence, 31, is looking back on her time working with co-stars Leonardo DiCaprio and Timothée Chamalet, when they were filming the blockbuster.

They drove me crazy that day!

The movie is about two low-level astronomers [Lawrence as Dr. Kate Dibiasky and DiCaprio as Dr. Randall Mindy] who must go on a giant media tour to warn mankind of an approaching comet that will destroy planet Earth.

But during a day of filming, the actress admitted she got incredibly annoyed with her male colleagues.

While promoting the new film, Jennifer appeared on The Late Show With Stephen Colbert, where she had the audience in fits of giggles with her stories from the set.

The star, who is expecting her first child with husband Cooke Maroney, admitted bluntly: “It was the most annoying day in my life!

“They drove me crazy that day!

She explained that the scene they were shooting was in a car as she revealed she had no idea what had gotten into the pair.

“Timothée was just excited to be out of the house.”

The 31-year-old added: “I think it was his first scene.

“And Leo had picked the song that was playing in the car.

She and Leo recently stunned at the premiere of the film in New York on Sunday, as she showcased her blossoming baby bump for the first time on the red carpet, two years after her last major debut for Dark Phoenix.

The heavily pregnant actress looked radiant as she posed for the cameras alongside her co-star.

She opted for a glittering floor-length fringed gold gown by Dior, which hugged her figure as she cradled her growing bump.

While Leo donned a fitted navy suit with black shoes.

Jennifer recently opened up about wanting to keep her pregnancy “private”, as she spoke about it for the first time in an interview with Vanity Fair last month.

The mother-to-be said while she is “grateful and excited”, she explained “every instinct in my body wants to protect their privacy for the rest of their lives, as much as I can”.

“I don’t want anyone to feel welcome into their existence and I feel like that just starts with not including them in this part of my work,” she said.

Don’t Look Up is coming to select theaters on December 10th, before hitting Netflix on December 24th.