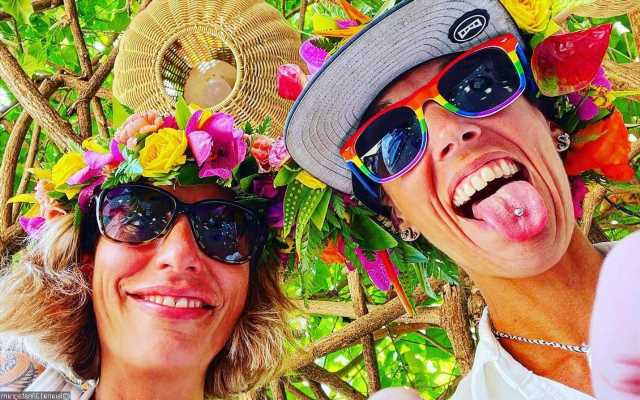 Through a social media post, Lyssa Chapman shares with the world that her nuptials to longtime partner Leiana Evensen was witnessed by seven of their closest family members.

AceShowbiz –Duane Chapman‘s daughter has made her longtime relationship with her girlfriend legal. Through a series of posts she shared on her social media account, Lyssa Chapman revealed that she tied the knot with Leiana Evensen in an epic Hawaiian ceremony on Friday, June 3.

Making use of Instagram, the 35-year-old uploaded a few photos from the gorgeous beach ceremony. “Last week Lei and I boarded a boat at 7 in the morning with 7 of our closest family members and we dedicated our love and lives to one another. It was the most epic conditions on the bay,” she gushed happily in the caption accompanying the post.

“The water was a glassy mirror. We had a sprinkle of rain, (blessing) and as we came upon our spot,” the “Dog the Bounty Hunter” alum continued reminiscing. In the pictures, she looked stunning, clad in a white dress. Meanwhile, her partner Leiana wore a white shirt and shorts. The two of them also wore colorful flower crowns atop their heads.

Lyssa intentionally kept her wedding a secret at first. “We planned and kept this day secret,” the bride wrote as she explained that her wedding was officiated by a family member. “With uncle David officiating, we stated our declarations of intent, said our vows and began life together OFFICIALLY as wife, and wife.”

Once the ceremony was completed, Lyssa and Leiana stripped down to a matching white bikini. They happily took a few snaps in the water to celebrate the momentous occasion. “It was literally a dream day. The best part is @leiana13 is my freaking WIFE !! I’m so happy, blessed, filled with love and gratitude. I never thought I was worthy or capable of this kind of love,” she further confessed.

Lyssa has since taken Leiana’s family name to become a part of the Evensen family. She and her new wife have been dating for about six years when they exchanged their vows. They celebrated their fifth anniversary in August 2021.

Duane himself was not able to attend Lyssa’s nuptials. “It’s really, really hard for him to come back to Hawaii,” she explained to PEOPLE. Still, she added, “He was of course on the phone with me all morning and during. We FaceTimed him a bunch. He was there in spirit and also electronically.”

Although Duane has faced allegations of being homophobic in the past, Lyssa assured that her father is supportive of her romantic relationship with Leiana. “I don’t want to put words in his mouth because I don’t know what his exact feelings about it are, but he’s never shown me anything other than support,” she stated.