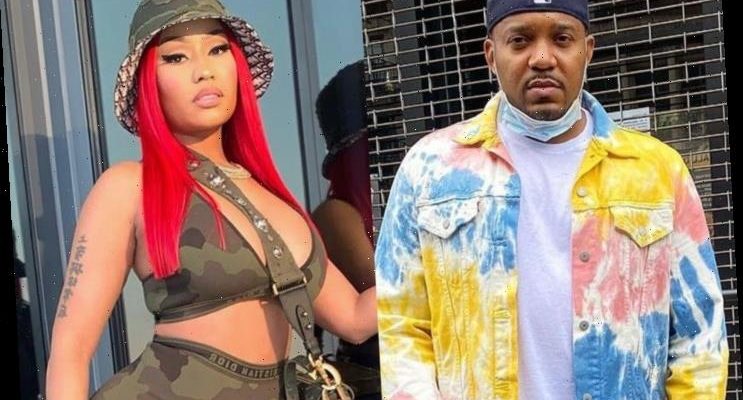 As people are talking about the raptress’ supposed baby bump in ‘TROLLZ’ music video and behind-the-scenes photo, the New York City DJ hints at his deejaying gig at her baby shower.

AceShowbiz –DJ Boof has backtracked after fueling Nicki Minaj pregnancy rumors. Speculation about the Trinidadian-born rapper has been going on for a while now, but it resurfaced recently with the release of Tekashi69 a.k.a. 6ix9ine‘s “TROLLZ” music video in which she’s featured, and the following behind-the-scenes photo she shared.

As people have been talking about the 37-year-old star’s apparent baby bump in the clip and the picture, DJ Boof appeared to have let slip of his deejaying gig at her upcoming baby shower. “Am I still deejaying the baby shower?” he commented below Nicki’s photo.

Realizing that he fanned the rumors even wilder, DJ Boof later returned to Instagram to backtrack on his earlier statement. During a Live session, he clarified that he didn’t confirm the pregnancy speculation. “I don’t know what you talkin’ ’bout,” he said, adding, “Who knows if she’s pregnant or not. I don’t know nothing. I haven’t seen this woman in a very long time. I don’t know nothing.”

When someone wrote in the comments that he’s “fired,” he denied it, saying, “I’m not fired. Why would I be fired? What the f**k would I be fired over? What are you guys talking about? I don’t know what you talkin’ ’bout.”

“Aight, Imma say one last thing… Why would I post something, and I just took it down because I don’t want people going around spreading rumors and gossip and I was just saying stupid s**t,” he went on insisting. “That’s like saying, ‘Hey, um, am I still gonna DJ your wedding?’ Knowing that she got married already. I’m just saying. Think about it.”

Hours earlier, Nicki fueled the baby rumors with her picture from the set of “TROLLZ” music video to celebrate the song hitting No. 1 on the charts around the world. She rocked high-waisted panties with only nipple pasties covering her modesty.

“#Trollz #1 in 48 countries. Love you. Thank you,” she wrote in the caption. “Link in my bio to watch the video. Updated on TikTok. Video on streaming now. Clean version on streaming now. All new merch, including masks updated on my site now. NickiMinajQueen.com.”

But people are more focused on her mid-section as she appeared to sport a rounder belly in the snap. “Nicki is really pregnant omg,” one Barb wrote, while another convinced fan tweeted, “If Nicki Minaj is pregnant, I’m happy for her. I know she gonna slay tf out her pregnancy and that’s on period.”

If Nicki is indeed pregnant, it will be her first child. She married her childhood friend Kenneth Petty in 2019.