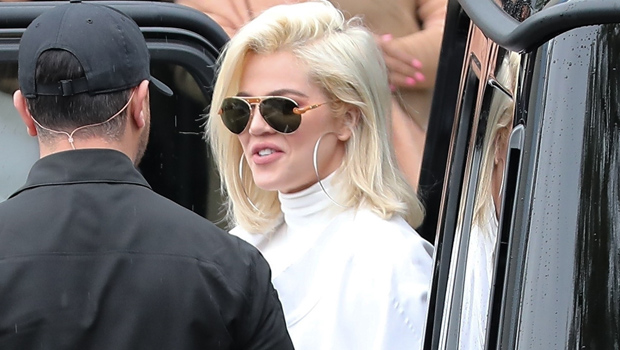 Khloe Kardashian, 34, went on a brief public outing for the first time since her reported split from longtime love Tristan Thompson, 27, went public on Feb. 19, and although sources told the Daily Mail that she is “completely devastated”, she surprisingly looked relaxed. The Keeping Up with the Kardashians star, who showed off a small smile, was headed to her brother-in-law Kanye West‘s Calabasas studio during the outing, and she looked gorgeous in a white turtleneck under a white jacket and matching white pants. She was joined by her sister Kourtney Kardashian, 39, and the two enjoyed a workout session, which Khloe documented in a few videos on her Instagram story.

Khloe’s latest activity seems to prove she’s moving on as best she can despite the drama surrounding her ex. Her split from Tristan was reportedly caused by him allegedly cheating on her with longtime family friend, Jordyn Woods, 21, on Feb. 17. Tristan and Jordyn were allegedly making out at a party that was thrown at the Cleveland Cavaliers player’s house in Los Angeles, and she even allegedly stayed with him until the next morning, according to Hollywood Unlocked.

Although Khloe hasn’t directly commented on the alleged scandal, she’s been posting numerous cryptic messages full of quotes to her social media over the past few days. “If you break someone and they still wish you the best, you’ve lost the greatest thing for you in life,” one quote read. “If your friendship has lasted longer than seven years, you are no longer friends, you are family,” another read.

Khloe and Tristan had been dating since 2016 and welcomed their 10-month-old daughter, True, last Apr. Jordyn has been best friends with Khloe’s sis Kylie Jenner, 21, for many years, and even lives with her. It will definitely be interesting to see where things go from here, but we’ll be updating this story as new information comes out!