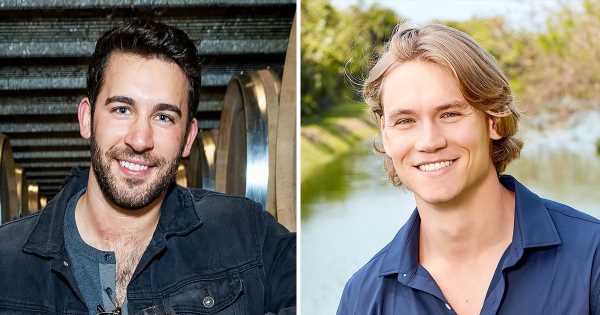 Letting bygones be bygones. The feud between Bachelor in Paradise stars Derek Peth and John Paul Jones may be over.

Us Weekly exclusively confirms that both men attended the launch party for Victoria’s Secret’s new Bombshell Intense perfume at Times Square in New York City on Thursday, September 5. Though the commercial banker, 32, and the Maryland native, 24, weren’t seen interacting, an eyewitness tells Us that they were both flirting with models at the event. John Paul, specifically, was seen recreating his signature hair flip from the title sequence of Paradise season 6 for female fans who asked. Both men left the party alone at around 11:30 p.m.

On the August 27 episode of Paradise, John Paul confronted Derek at Chris Randone and Krystal Nielson’s wedding and accused him of taking “advantage” of fans “sexually.” He also claimed that the season 12 Bachelorette contestant lied to their shared love interest, Tayshia Adams, and went on Paradise to promote his podcast, “The Betchelor,” rather than to find a wife.

“You’ve demonstrated using your experience and your status to hook up with women that are infatuated with public figures,” John Paul told Derek in the episode.

After the onscreen altercation, John Paul took to his Instagram on September 2 to apologize to Chris and Krystal, who met and got engaged on season 5 of Paradise, for his screaming match with Derek at their wedding.

“After watching this past Tuesday’s [episode] of BiP and having had time to step away from it all and introspect on my actions, I do deeply regret that my behavior was disruptive and upsetting to the celebration of Chris and Krystal’s wedding reception,” he wrote.

However, Derek didn’t believe John Paul’s apology. The season 4 Paradise alum took to his costar’s comments section to accuse him of trying to “save face.”

“Don’t insult our intelligence,” Derek wrote. “You could reach out on your own instead of on Instagram. This is just an attempt to save face.”

Derek competed for JoJo Fletcher’s love on season 12 of The Bachelorette, while John Paul vied for Hannah Brown’s affection on The Bachelorette season 15. The banker got engaged to season 21 Bachelor contestant Taylor Nolan on season 4 of Paradise in 2017. The two split after a year in June 2018.