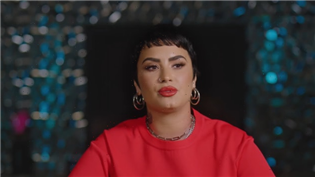 As you likely know by now, Demi Lovato has their own show about aliens on the Peacock streaming service.

Honestly, it’s nice to have something like that on its own instead of being on the History Channel for some reason.

In a recent interview, however, Demi turned heads with their explanation for why they refer to “ETs.”

According to them, “aliens” could be an offensive way to refer to extraterrestrial lifeforms.

As the titular host of Unidentified with Demi Lovato, Demi naturally has a lot of opinions about life from other worlds.

They even believe that they may have witnessed some extraterrestrial phenomena.

Demi also has strong views about how we should view — and even discuss — this extra-solar life.

Demi Lovato spoke to The Pedestrian about their view of other intelligent life in the universe.

First and foremost, they don’t think that extraterrestrials want to obliterate us, enslave us, or eat us.

“I really think that if there was anything out there that would want to do that to us, it would have happened by now,” Demi suggested.

That makes a lot of sense and we are totally onboard with Demi’s reasoning here.

While the idea of life on other planets evolving in such a way that we would be edible to them is … improbable, other hostile intentions are possible.

But a spacefaring civilization would need only chuck a few asteroids at our fair planet to end our species. And yet, here we stand.

“But I think that we have to stop calling them aliens,” Demi continued.

They explained that they feel this way “because ‘aliens’ is a derogatory term for anything.”

Demi continued: “That’s why I like to call them E.T.s!”

Now … the initial reaction from many was that Demi is saying that extraterrestrial life forms would be offended if we call them “aliens.”

After all, alien simply means “belonging to another.” A partner could be alienated. An “alien” could come from another country or planet.

But that digs into Demi’s actual meaning when she speaks about the term being derogatory.

For years, the favored buzzword of racists and xenophobes was “illegal aliens” whom they were convinced were a scourge upon our nation.

In recent years, their terminology has gotten worse, with bigots referring to actual human beings as “illegals.”

But still, there are no shortage of people living today who hear the word “aliens” and don’t think of Vulcans or of aliens from much better science fiction.

Instead, they think of themselves and their families and how people have spat that word with their voices dripping with contempt.

In that regard, we can understand Demi’s statement.

But … “aliens” still primarily refers to extraterrestrial and generally extrasolar life, whether microscopic or highly intelligent (or both?).

There is no reason for an advanced spacefaring race to take offense at one term over another.

And while we cannot speak for immigrant communities, we are uncertain if they would ask any English-speakers to make this shift in diction.

Before being accused of sexual misconduct, astrophysicist Neil deGrasse Tyson was a go-to scientist for this sort of discussion.

TMZ spoke to Tyson, who noted that we don’t know how extraterrestrial life thinks or feels and they don’t know what our words mean. Thanks, Neil.

He can now go back to misunderstanding fundamental aspects of science fiction films in order to remind people on Twitter that he’s smart.

One day, humanity — if we survive — will almost inevitably make contact with intelligent life from well beyond our solar system.

At that time, there may be actions that we must take to be inoffensive in terms of the cultural, sensory, and psychological sensibilities of this non-human life.

For now, we should focus primarily upon being kinder to one another. But … maybe that’s the gist of what Demi meant all along?