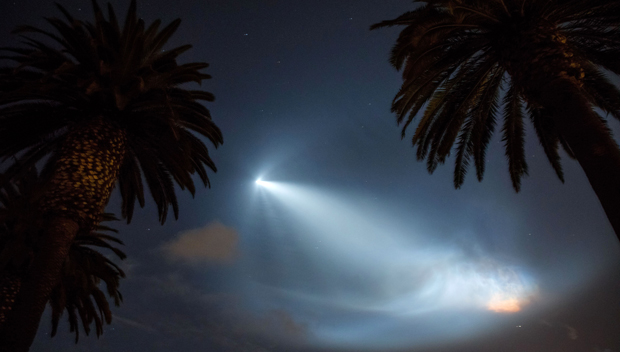 Folks in the American Southwest were left disappointed – again – when the Delta IV rocket launch was postponed for a fourth time!

***UPDATE** The fourth try was not a charm as the launch has been delayed until Dec. 20 at 5:44 PST. United Launch Alliance posted this message at 5:40: “This is Delta Launch Control. ULA Launch Director Lou Mangieri has announced that we will not continue with today’s launch attempt. The team will prepare for a 24-hour recycle.”

It’s always amazing to see sky phenomena and there’s going to be a doozy on Dec. 19 when a Delta IV heavy rocket will launch from central California’s Vandenburg Air Force Base. The blazing rocket and it’s contrail will be seen in the night skies throughout southern California, Baja Mexico and parts of Arizona and Nevada. It goes up at 5:44pm PST and should be spectacular as it reaches sunset when its contrail could generate a multicolored phenomenon lit by the sun in the night sky. You can watch the launch live as it happens by clicking HERE, with commentary beginning 20 minutes prior to liftoff.

While the launch itself will be impressive, we can’t wait for the videos to start rolling in from folks who get to witness quite a sky show across the Southwest, and SoCal in particular. In the past there have been rocket launches from Vandenburg that have caused such a wild sky phenomenon that people who are unaware of what’s happening have thought that they were seeing invading UFO’s. Elon Musk‘s Space X has been launching their Falcon rockets out of Vandenburg and nearly every time people take to Twitter with wild videos asking what the heck is going on in the sky.

The 233 foot rocket will be carrying a spy satellite for the U.S. National Reconnaissance Office. The United Launch Alliance has tried three times since Dec. 7 to launch it. On that day was scrubbed three hours prior to launch for an unspecified reason. The following day it was set to go up but aborted with just seven seconds before it was supposed to launch. The next launch was scheduled on Dec. 18 but was high winds caused the NROL-71 mission to be moved to today. The weather conditions look good so fingers crossed the fourth attempted launch will be a success.