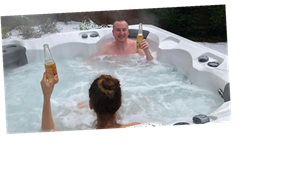 Andy Whyment has enjoyed a soapy soak as he refused to let his cancelled holiday dampen his spirits.

The Coronation Street legend and his wife Nichola were due to enjoy an incredible trip to Cape Verde as they planned to end a tough year in style.

They had their sunshine break to the west African country planned for ages – but Covid-19 put a halt on their plans away.

The couple still have the time off of course, so decided to put it to good use.

They jumped into their garden hot tub with some beers – and posted some cheery snaps to prove they aren't cut up about the cancellation.

Andy, 39, still hopes to get away in 2021 but for now the only warmth they are getting is in the tub.

The actor – who played dopey Kirk Sutherland on the cobbles – refused to be down in the dumps despite their holiday plans being left in tatters.

He uploaded some bubbly Instagram snaps as he sunk some beer with his favourite person.

He captioned the post: "We should’ve flown out to Cape Verde this morning for some sunshine but instead we’re at home with snow at least we’ve got a nice Hot Tub to enjoy though and a beer so me and @nicski31 can’t complain too much xx."

It was a child-free time for the couple, who share kids Thomas, 11, and nine year old daughter Hollie.

Loved-up Andy and Nichola celebrated their 13th wedding anniversary in June and they look happier than ever.

They marked the special day with a series of snaps for fans to see – and even put on their suit and dress from their big day.

Smitten Andy and Nichola first got together over 14 years ago and they tied the knot in 2007 with all their friends and family.

The soar star previously told OK! that she is the only woman for him – and can't wait to spend the rest of his life with her.

He told us: "She’s gorgeous! I’m a very lucky bloke, we’ve been together 14 years and we just don’t argue, we get on so well."