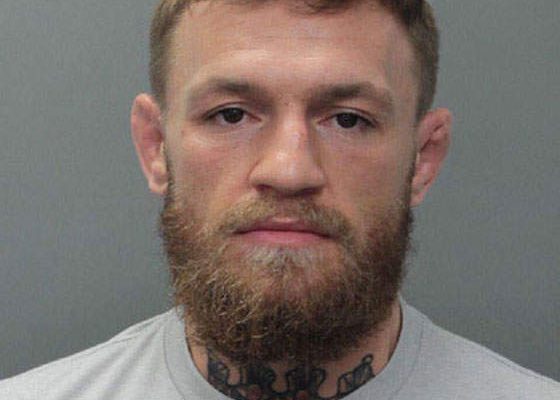 I think the constant kicks and punches to the head have turned Conor McGregor’s remaining brain cells into mush. While he was leaving a nightclub in Miami recently, a fan ran up on him and tried to take his picture. That’s when Conor performed his own version of the Hulk Smash by grabbing the phone and slamming it to the ground. And though most disturbed celebs would have ended it right there, not Conor. He had a few more UFC moves ready to unleash on the helpless device.

I’m sure nobody is surprised that Conor has had another questionable outburst with inanimate objects because this assault pales in comparison to that time last year when he beat the hell out of a bus and injured a fellow UFC athlete in the process. According to TMZ Sports, the latest incident took place at 5AM on Monday while people were leaving LIV nightclub in Miami Beach. An unidentified fan and Conor, who was in Miami celebrating his mother’s birthday with family and friends, both exited around the same time. The fan must have thought, “Wow! It’s Conor McGregor. I’m sure he won’t mind if I….” But uh, yeah, he DOES mind. Because after the fan whipped their phone out, Conor transformed into one of the creatures from Altered Beasts and began kicking that phone’s ass!

First, Conor slapped it out of the fan’s hand sending it hurling toward the ground. Next, Conor came through with a few hard stomps before finishing with the boldest move of all: putting the phone in his pocket and walking away. Later that day the fan filed a police report and Conor was subsequently escorted to a different kind of nightclub called The Jailhouse. Conor was arrested and booked for robbery/strong arm and criminal mischief. He was held on $12,500 bail but has since been released. His lawyers prepared a statement prior to his release, but honestly they probably have a template saved to their desktops and change the words around as needed since Conor is always fucking up.

“Last evening Conor McGregor was involved a minor altercation over a cell phone that resulted in a call to law enforcement. Mr. McGregor appreciates the response of law enforcement and pledges his full cooperation.”

In the event that Conor gets convicted for beating that phone to death, law enforcement may also use last year’s Battle Royale versus the bus against him during sentencing. I wish I could say I feel bad for Conor but I don’t. Lock his ass up and send him back to whatever Mortal Kombat-themed island he was born on because his rage knows no end. Maybe once Naomi Campbell gets done with Liam Payne she and Conor can begin their phone hurling, a whirlwind romance since he’s the only other person who hates phones just as much as she does.

Check out Conor’s first steps as a free man (for now) below.