As O’Brien prepares to conclude his nightly talk show on June 24, he had “Barry” star and former fellow “Saturday Night Live” alum, Bill Hader, on the show to discuss his career and his time on the variety sketch show.

Conan asked Hader if there was ever a sketch he wrote or performed in that simply didn’t make it to air because it was so bad. Hader immediately recalled a sketch he’d written for himself and then-host Rudd called “Ed Burns Grill Boys” in which they played two guys impersonating the voice of actor Ed Burns at a barbeque.

Hader alleged that the sketch didn’t work at dress rehearsal because, while he was fine doing Burns’ voice, Paul Rudd would not do the voice.

With that, Rudd took the stage by surprise and insisted that he did indeed do the voice of Burns, arguing the sketch didn’t work because it was “terrible.” He even claimed to have proof in the form of a clip from the dress rehearsal in question. However, when the show cut to the clip, it turned out to be the final part of a decards-long prank that Rudd has been pulling on O’Brien. 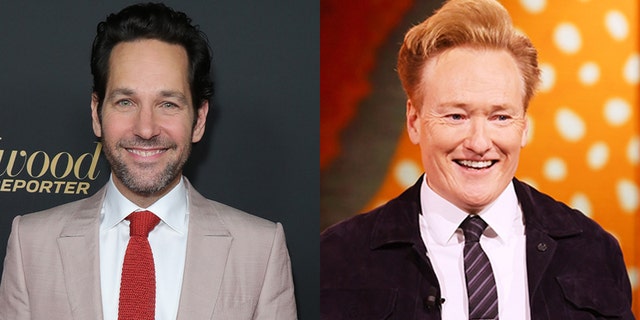 The clip was not of an “SNL” dress rehearsal but rather a ridiculous clip from the 1988 movie “Mac and Me” in which a boy’s wheelchair brakes stop working, sending him careening off a cliff into the water, shocking a somewhat poorly animated alien at the bottom.

For those unfamiliar, it’s the same clip that Rudd has been bringing with him, without fail, every time he’s appeared on any iteration of O’Brien’s talk show. Although it was a prank on him, O’Brien immediately stood up and danced around the stage with delight at seeing the funny clip on last time — or so he thought.

“It’s been like 25 years of you coming on the show and you’d always say ‘I’ve got a clip,’ and every time, for years, I would be convinced that I would see the real clip because you’re such a genuinely nice person,” a delighted O’Brien said. “And you would say ‘No, this movie is really important to me and I put my own money into this and I really care about this’ and then you pull that sh– every time!”

Still, Rudd was not done pulling a fast one on the host.

“I never really imagined, 20 years ago, that here we would be,” a proud Rudd said. “I just remember the very first time thinking, ‘It’s so artificial to come on and sell your wares and show a clip from your movie and… What if I just show a clip from another movie?’”

He went on to explain that, before his first time showing the “Mac and Me” clip, Rudd considered bringing another out-of-context clip with him.

“We’ve never talked about this really, but I thought, what if I show a clip from this movie that I saw a long time ago that’s really strange, and there’s one scene in particular. And I was kind of waffling because there’s another movie that I was obsessed with at the time that was equally like, ‘who was this made for?’ called ‘Baby Geniuses.’”

Rudd added: “Seeing as how it is your last week, congratulations by the way, there was no way I was not going to come. And I was hoping it would be OK to show you the other clip.”

O’Brien agreed, but Rudd simply played the “Mac and Me” clip for a second and presumably final time.

“You’re the worst guy in the world,” O’Brien joked. “What a horrible man.”