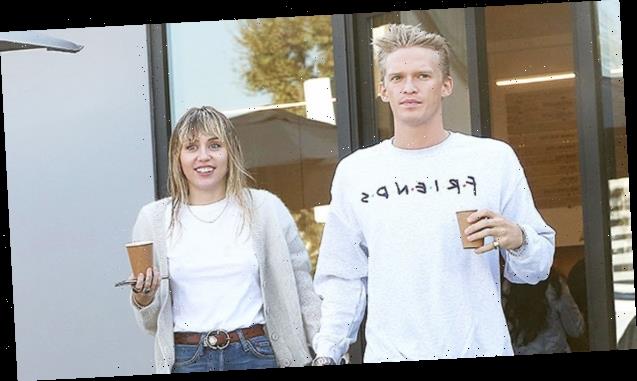 Miley Cyrus & Cody Simpson seem more in love than ever! The cute couple just posed for an adorable selfie that Cody shared to his Instagram story.

Cody Simpson, 23, has once again declared he’s “in love”! The Australian born singer posted a sweet new selfie of himself and girlfriend Miley Cyrus, 27, to his Instagram story on Saturday, Aug. 1. “In love with my best friend,” Cody gushed in text added to the photo, which showed the duo posing in a car. Miley appeared to snap the candid photo, extending her arm and leaning into Cody.

The “Wrecking Ball” singer showed off her rock ‘n’ roll style for the outing, rocking a blonde mullet underneath Gucci’s newly-released “Off The Grid” fedora hat which retails for a cool $530. Miley opted for the orange color of the canvas accessory, which features a tone-on-tone print of the Italian brands’ iconic double G emblem, as well as a black leather patch that reads “Gucci.” She paired the cool hat with a vintage logo Jean Paul Gaultier t-shirt, finishing her look with a flirty red lipstick.

For his part, Cody wore a black graphic t-shirt that showed off his various tattoos — including a heart one that reads “mum” for his mother Angie Simpson as well as a small image of Elvis Presley on his right forearm. Still rocking his blonde buzz cut, courtesy of Miley, he kept his eyes hidden behind a chic pair of black shades. His arm muscles looked more defined than ever, which is no surprise given how much he’s posted about working out over the last few months.

Balls to the wall / @gainsbyhaynes

The couple have been literally inseparable since hooking up romantically last fall, even adopting rescue dog Bo since going into quarantine! Cody even dedicated a number of poems to his leading lady in his book Prince Neptune: Poetry & Prose. “Being with Miley is a wonderful thing in my life…she is creative and inspiring, fiercely independent and encourages me to be my own person, too. We are both creative individuals who support one another with our work,” he gushed to The Sydney Morning Herald in April. “Miley also inspires my art. There’s some romance in the poems I have written and yeah, they might be about her. It’s inevitable that what happens in my private life comes out in my work,” he also said.