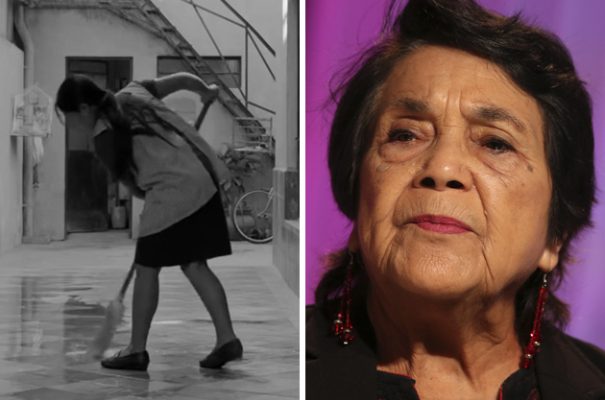 Civil rights activist Dolores Huerta co-founded with Cesar Chavez the United Farm Workers union where she currently serves as VP (Rosario Dawson played her in the 2014 biopic Cesar Chavez which starred Michael Pena as Chavez). Huerta is also founder and president of the Dolores Huerta Foundation, which connects community-based organizing to local, state, and national movements. In 2012, President Bill Clinton awarded her the Presidential Medal of Freedom, the highest civilian honor in the U.S. These are her thoughts on Alfonso Cuarón’s Roma, which is up for 10 Oscars including Best Picture and Best Foreign Language Film.

When I saw Alfonso Cuarón’s film Roma it moved me to tears. Cleo reminded me of women from my hometown agricultural community of Stockton, where I grew up in rural California in the 1950s. They were women who have been taught to lovingly serve their families and who’ve been so accustomed to being accommodating, that naturally, many gravitated towards domestic work, taking on the care and burden of other families and their own children. In Roma, with grace and dignity, Yalitza Aparicio beautifully portrays Cleo, a housekeeper and nanny, and in turn, she puts a human face to the respectable, vital job that millions of women do every single day in households around the world.

I was raised by a strong, single mother who was the sole provider for her three children after she left our father. I watched my mother work tirelessly with the same quiet dignity to become more financially independent so she could provide everything for us: she worked three jobs, saved to open a restaurant, and took over a 70-room hotel where we three kids helped in the maintenance and were taught crucial lessons about the value of work and serving our community. My mother was my role model and idol — gentle, kind, generous and strong-willed. And like Marina de Tavira’s character, Sofia, she fought for the well-being and welfare of her children.

As an activist, and specifically my work with farmworkers, I learned that the bias and racism that manifests itself in the mistreatment of workers comes from a simple lack of humanity. We fight hard every single day for basic human necessities for farmworkers in the fields—food, shelter, water— simply because these workers are not looked at as human beings deserving of dignity and respect. So when a film like Roma comes along that impacts and inspires so many people globally, we are reminded of the power of film and storytelling to change hearts and minds and unite us in our shared humanity. Alfonso Cuarón’s decision to share his childhood memories through the eyes of the beautiful indigenous woman that raised him and his family humanizes the invisible people whom are atypically represented on film and often overlooked by society. Through his poignant portrayals, Cuarón honors them.

My experiences as a Mexican-American growing up facing constant discrimination is what led to my choice to leave teaching and turn to organizing. I learned organizing so workers like Yalitza’s character can organize to improve their working conditions like domestic workers in California through labor unions. What we do as organizers is give workers their voice to fight for themselves. We should all be more vocal in leading the fight for workers’ rights and for all humans. I had witnessed the power that organizing and visibility can give to any group, but specifically people of color. Roma reminds me of that power and that seeing women, people of color and indigenous people on screen is crucial.

Roma is a love letter to the women that raised Alfonso Cuarón and a reminder that the strength of women lies in our solidarity.