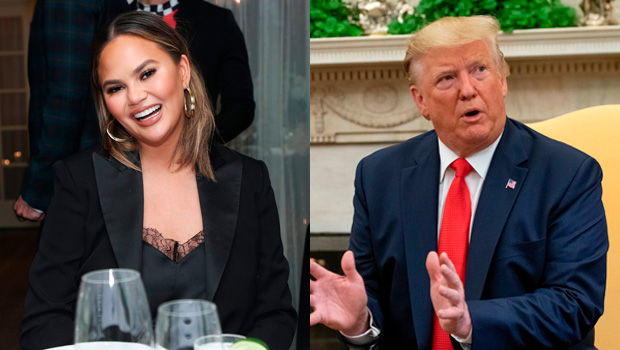 Chrissy Teigen couldn’t care less that Donald Trump thinks she’s ‘filthy-mouthed,’ and she proved that again when she slammed him with another explicit insult!

Donald Trump messed with the wrong woman. Fresh off the “filthy-mouthed wife” calling the president a “p***y ass b*tch,” Chrissy Teigen clapped back again with another beautiful diss. The Bring the Funny judge was approached by paparazzi while out with her kids, Miles and Luna, in Los Angeles on September 11, and they had to know what else she thought of the president after their surprising spat. While she tried to avoid the topic, they wore her down right before she hopped into the car to leave. She called President Trump an “a**hole,” and it was amazing. Chrissy at first didn’t want to say anything, because she was with Luna. As she put it, “I don’t talk about [Trump] in front of my daughter.”

Plus, she said, Trump wouldn’t even hear what she said about him until later. “He’s probably sleeping right now,” she told a reporter from TMZ, laughing. “He’s a bit of a night owl.” The reporter pointed out that her good friends, Kim Kardashian and Kanye West, have a working relationship with the president. Kanye had a memorable visit to the Oval Office last year, while Kim has met with the Trump family several times in Washington, DC, to discuss her work in criminal justice reform. Chrissy said she really doesn’t want them to put in a good word for her, though, as she’s “good [with] him not liking me.”

The controversy started when Trump went on another Twitter rant about how all he’s done for criminal justice reform, referring to a bipartisan legislative effort promoted by his adviser/son-in-law Jared Kushner, without getting support from celebrities who have advocated for it. He tagged everyone named in the tweet — former President Barack Obama, CNN anchor Van Jones, and John Legend. But he only referred to Chrissy as John’s “filthy-mouthed wife.” Chrissy’s hilarious response got a NSFW hashtag trending. Seriously; why would you ever try to go after the queen of Twitter?

Trump may have figured that out after seeing the overwhelming support behind her. He’s utterly incapable of not tweeting, and he hasn’t responded to her. Chrissy’s followup tweet was even better. She tweeted out a photo of herself working on a project for Luna, captioned, “When mommy was making your sign and the p***y ass b*tch president had his 9th meltdown of the day.”