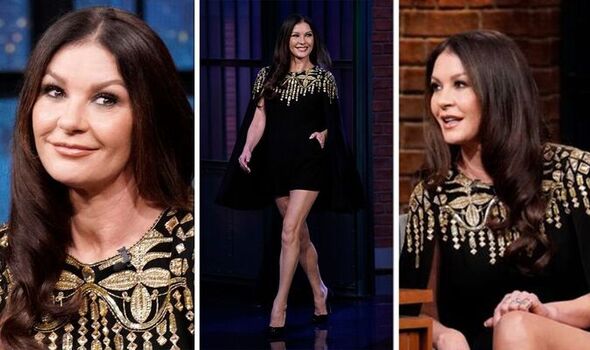 Catherine Zeta-Jones appeared in a jaw-dropping little black romper as she flashed her sculpted legs and flaunted her enviable brunette locks.

Catherine Zeta-Jones appeared in a jaw-dropping little black romper as she flashed her sculpted legs and flaunted her enviable brunette locks.

While talking about her family, Seth congratulated Catherine on her 22 years of marriage to Michael Douglas.

The actress seemed a bit awestruck as she realised just how long it has been, and revealed that they have the same birthday, September 25, although there is 25 years difference between them.

She grimaced slightly as she uttered their age gap, but quickly moved on, sharing how they had celebrated their most recent wedding anniversary in Morocco.

The couple have two children together, Carys, 19, and Dylan, 22, the latter of whom escorted his mum to her latest premiere for National Treasure: Edge Of History.

On the talk show, the actress also cringed as she admitted she hasn’t watched everything she’s acted in as she’s “way too critical” of herself.

Catherine Zeta-Jones floored fans as she strutted onto the show

The actress flashed plenty of leg in her little black romper with a short cape fluttering behind her.

Catherine’s age-defying looks were accentuated with her natural and minimal makeup.

Catherina Zeta-Jones was 31 when she married Michael in November 2000.

The Wednesday star grimaced as she explained that they share the same birth date, but with a 25-year age gap.

She shared a still from the show saying: “It is always so much fun to catch up with Seth.”

The star wore a long dark wig for her role as Morticia Addams, followed by a short platinum blonde number for her new Disneyseries National Treasure.

Catherine shared on the show that while Michael was working that evening, her son stepped up to escort her at the event.