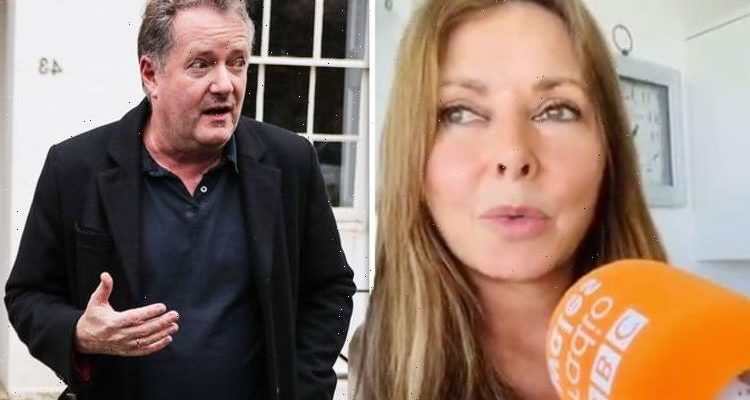 Carol Vorderman, 60, has taken to Twitter to break her silence on Piers Morgan’s cheeky comments about her revealing Instagram pictures. The former Countdown presenter branded the ex-Good Morning Britain host a “little bl**dy troublemaker” after he posted several fire emojis in response to her recent bikini photos.

Piers’ comments came after Carol caused a stir amongst her 130,000 followers yesterday evening with a busty snap in a red bikini.

The television personalities appeared to get into a flirty exchange after Piers complained about the rainy weather in the UK.

Piers fumed in view of his 7.9 million Twitter followers: “First August I’ve spent in the UK since 2005… and it will be the last.

“Seen better Januaries than this.”

“You should come up Wales P….it’s roasting here,” Carol promptly replied in view of her 466,000 followers, inviting Piers to her hometown.

In response to Carol’s suggestion, Piers mischievously quipped that despite his hopes to head to a hotter country this summer, her Instagram photos had made him rethink those plans.

The presenter wrote back to the maths expert: “I was thinking of somewhere a little hotter C, though having seen your recent Instagram pix…”

Piers then added a series of fire emojis, which are usually used to show that something is exciting, or to compliment someone on looking sexy.

Carol spotted Piers’ cheeky response this afternoon and couldn’t resist hitting back at his antics.

The mum-of-two wrote back: “Lols….you little bl**dy troublemaker,” alongside laughing emojis and an eye rolling emoji.

Carol and Piers’ conversation was spotted by eagle-eyed fans, with one wondering: “Was this meant to slide into her DM’s?”

“As if he just called carol fire,” another social media user commented.

A fourth commented: “Ew like seeing your nan and grandad flirting online.”

“When you forget this isn’t a DM,” a fifth joked.

Amid her exchange with Piers, Carol took to Instagram again to update fans on her new paddleboarding hobby.

The star posted a photo of herself teasing fans with a glimpse of her cleavage.

Carol was pictured wearing a neon pink wetsuit while making the most of the sunny weather in Wales.

She beamed for the camera while accessorising with a pair of mirrored sunglasses for the outing.

The presenter captioned the sizzling snap: “And we’re off to the water again #paddleboarding @fatsticksboards.”