Sad news was reported on April 30 when Ashley Judd and Wynonna Judd announced the death of their mother. The 76-year-old Judd family matriarch died just hours before she and Wynonna were to be inducted into the Country Music Hall of Fame.

That ceremony took place as scheduled on May 1 and both the sisters were in attendance. It was a very emotional night for everyone including Carly Pearce who was tapped to perform. Many said they don’t know how she kept it together on stage but Pearce did get emotional discussing the performance. Here’s more on that night and what the  “Show Me Around” artist had to say.

The siblings put out a statement on social media that read: “Today, we sisters experienced a tragedy. We lost our beautiful mother to the disease of mental illness.”

They added: “We are shattered. We’re navigating profound grief and know that as we loved her she was loved by her public. We are in unknown territory.”

Naomi and Wynonna had just performed at the 2022 CMT Music Awards weeks earlier. It was the mother-daughter singing duo’s first televised appearance in more than 20 years.

Pearce was one of three musical guests who sang a tribute for The Judds as they were ushered into the Country Music Hall of Fame.

During an interview with Josh, Rachael, and Grunwald in the Morning on 99.5 WYCD Detroit, Pearce became emotional when she spoke about performing in front of Ashley and Wynonna just hours after they lost their mother.

“I met [Wynonna] a few weeks ago at the CMT Awards, which was so special,” Pearce said. “And I had the honor last night of getting to be a surprise musical guest, and sing ‘Grandpa’ for Wynonna and Ashley at the Country Music Hall of Fame. It was really heavy … It was really intense, but I’m so honored.

“I knew I was doing this a few months ago, but I had no idea what was going to happen. Found out the song that Wynonna really wanted to hear was ‘Grandpa’ so at the last minute, we changed my song. It was really special, something I think will be a moment I will never ever forget and one of the greatest things I got to do … That was the most nervous I’ve ever been just because I knew they were there … I don’t understand what it’s like to lose your mother, and to lose your mother hours before this celebration, and hearing those girls speak, and feeling the heaviness in the room, was so hard to describe. They were so sorry their mom couldn’t hold on to be there but knew how much it meant to her.” 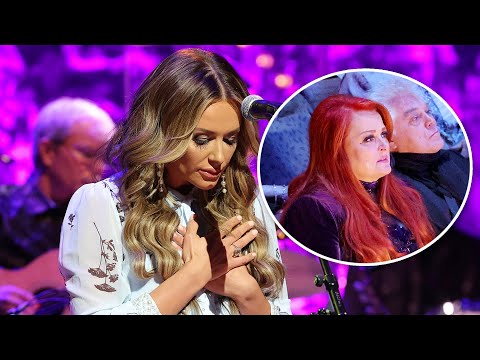 Following The Judds induction ceremony, Ashley took to Instagram to share a goodbye message to her mother.

“In beloved community with my big sister, gazing at the new bronze plaque … listening to #grandpa, my altar to mama, with her silhouette from when she was 11, my bereft Pop singing ‘How Great Thou Art’ for me on my sleeping porch (we are singing hymns this evening),” Ashley captioned the post. “Sister, mom, and me on Little Cat Creek in Lawerence County, Ky. Your outpouring is reaching me. Thank you for every thought, prayer, message, text, email, post, expression. We each are alone and we are in fellowship, broken and held, protected from nothing and sustained in everything. It’s the beginning of an old story, life and death, loss and life. Be free, my beautiful mother. Be free.”