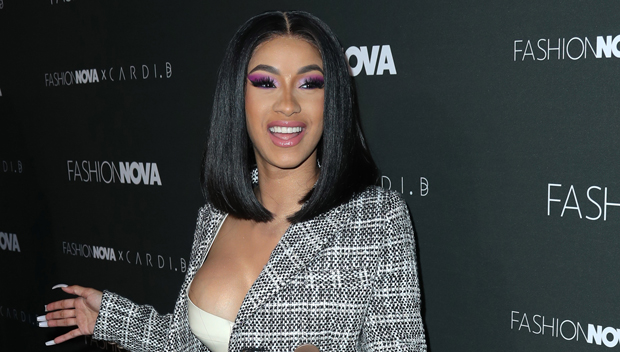 Cardi B rapped ‘I got a baby, I need some money’…apparently, to buy Kulture flashy bling! Here’s approximately how many diamonds it took to spell out Kulture’s name.

Like mother, like daughter! Cardi B, 26, loves to pile on the bling, and her seven-month-old daughter, Kulture Kiari Cephus, is already taking after that trait. On Feb. 20, the “Money” rapper showed off her baby’s new jewelry, which was a bracelet that spelled out “Kulture” in sparkly diamonds! Shyne Jewelers created the customized piece, and those alphabet diamonds didn’t come at a kiddie price. “It’s approximately 140 diamonds” and weighed around “2 [carats] total weight,” ringing in at “approximately $5900,” David Goldstein of Goldstein Diamonds estimated, while speaking EXCLUSIVELY with HollywoodLife. A fitting present, considering that Kulture just achieved a major milestone: she’s finally saying “mama” and “papa.”

Kulture made Cardi’s Grammy win for “Best Rap Album” especially memorable by uttering “mama” one day after the award show. “After a week of only saying papa !She saying mama! Happy 7 months Kulture ! We love you,” Cardi captioned the adorable video of Kulture testing out her new vocabulary on Feb. 11. The two are inseparable, despite Cardi’s busy career of chasing “checks” and music accolades. The “Bodak Yellow” rapper took her mini me on a private jet ride on Feb. 20, as seen on her Instagram Story.

Offset, 27, has also been bonding with his and Cardi’s baby girl! Cardi filmed the Migos member playing with Kulture as she kept saying “mama” on Feb. 14, to his (fake) annoyance. As for the relationship between the parents themselves, it’s on the mend — they appeared very much together at the Grammy Awards on Feb. 10, after Cardi announced their split on Dec. 5, 2018. In that same month, Offset was accused of trying to plan a threesome with Summer Bunni and Cuban Doll while Cardi was pregnant, and he’s been working for his wife’s forgiveness ever since. “Offset has been doing everything he can to win her back officially, and things are extremely close to getting there,” a source EXCLUSIVELY told HollywoodLife after the Grammys.

Really, it’s Kulture who’s bringing her mom and dad back together, as she’s both Cardi and Offset’s priority! “[Cardi] feels [Offset’s] doing everything in his power to get their family back together for good, which is why she wanted to arrive with [Offset] and sit with him at the Grammys,” our source said. There’s no better way to celebrate a reunion with some new diamonds!