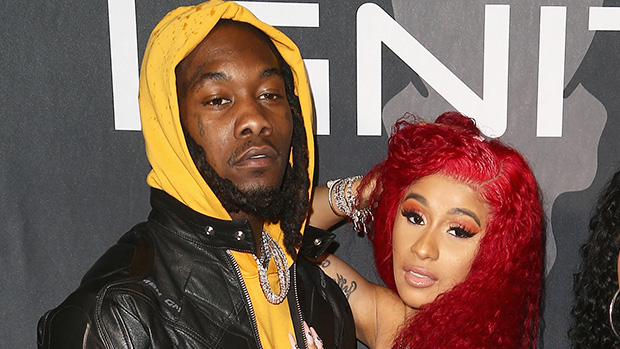 Cardi B and Offset sealed their reconciliation with a pre-Valentine’s Day grind session on Feb. 13! The couple attended a pre-holiday bash in Bel-Air, where Cardi showed off her 8-carat engagement ring for the first time since their split in December!

Back together and it feels so good! Cardi B, 26, and Offset, 26, appear to be back to their old PDA ways! The couple — who recently got back together after his cheating scandal in December — were all over each other at Dan Bilzerian‘s Valentine’s Day party in Bel-Air, on Wednesday, February 13. And, Cardi showed off her 8-carat engagement ring on the red carpet for the first time since their split last year. The two were all smiles in photos, where they held each other close.Cardi‘s sister, Hennessy also walked the red carpet with her and Offset.

The Grammy Award-winning rapper was at the party, which was themed “Angels & Devils”, to perform, along with Quavo, Tyga, Swae Lee and DJ Carnage. When Cardi took the stage to perform a medley of her hits, things took an R-rated turn when she pulled Offset to the front of the stage during “No Limit” — the song she’s featured on with G Eazy, who was not at the party. At one point during her set, Cardi signaled Offset, who was already standing on stage smoking, to “come here.” That’s when she began grinding on him while she rapped to a packed crowd with their cell phones in her face.

Cardi, who showed off her amazing post baby body in a cleavage baring black bodysuit, also performed her hits, “Money”, “Bodak Yellow”, and “I like It”. She later danced to her song “Taki Taki”, as she mouthed the lyrics. The rapper rocked long, red, crimped locks for her performance, which was a major 180 from her short do’ at the Grammys on February 10.

Cardi B shows off her engagement ring on the red carpet with Offset for the first time since their split. The couple attended Dan Bilzerian’s Valentine’s Day party in Bel-Air on Wednesday, February 13, where she performed. (Photo credit: Getty Images for Ignite)

Cardi and Offset’s night out came just in time for her return to Instagram. The rapper temporarily deactivated her account, on February 12, following backlash from social media users who claimed she did not deserve the Grammy for Best Rap Album, which she won at the annual awards show two days prior.

The mother of one returned to IG on February 13, for a special announcement. “Ok so I’m back from retirement to announce I have a brand new song coming out Friday at midnight with Bruno Mars,” Cardi captioned an Instagram photo of promotional art for the upcoming single. The photo featured her and Mars standing together.