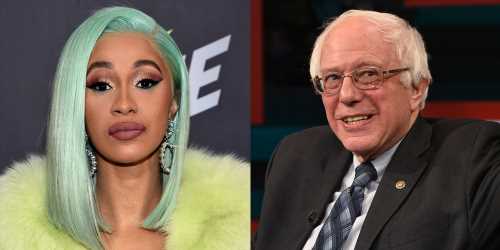 Cardi B seemed to endorse Bernie Sanders as the Democratic Presidential nominee in the 2020 election.

It started when Cardi B posted, “I been reading about Bernie Sanders and I’m really sad how we let him down in 2016 This man been fighting for equal rights,HUMAN rights for such along time.Seeing this country become a better place been really his passion for a long time not a new front for a campaign.”

Then, a troll quote tweeted that tweet and wrote, “Cardi B complained about paying too much in taxes, then endorses bernie who will raise taxes on the rich to fund his extreme socialism.”

Well, Cardi B had a great response, writing back, “I don’t mind paying taxes if I see on what am I paying my taxes on. Its sad that we pay so much taxes yet we don’t have free college education neither free healthcare.”

Meanwhile, Bernie Sanders also responded directly to Cardi B, writing, “Thank you @iamcardib! Our fight for justice is far from over and we are not giving up.”

If you don’t know, last year, Cardi B went on a political rant over where her tax money was going.