Catalan artist and director Albert Serra (The Death Of Louis XIV, Liberte) returns to Cannes Film Festival Official Competition with a rarity for him, a contemporary feature film, not what we have come to expect from this filmmaker who usually works in period pieces. And even though he is not French he has made a fascinating movie all in French and set in the colorful French Polynesia island of Tahiti. 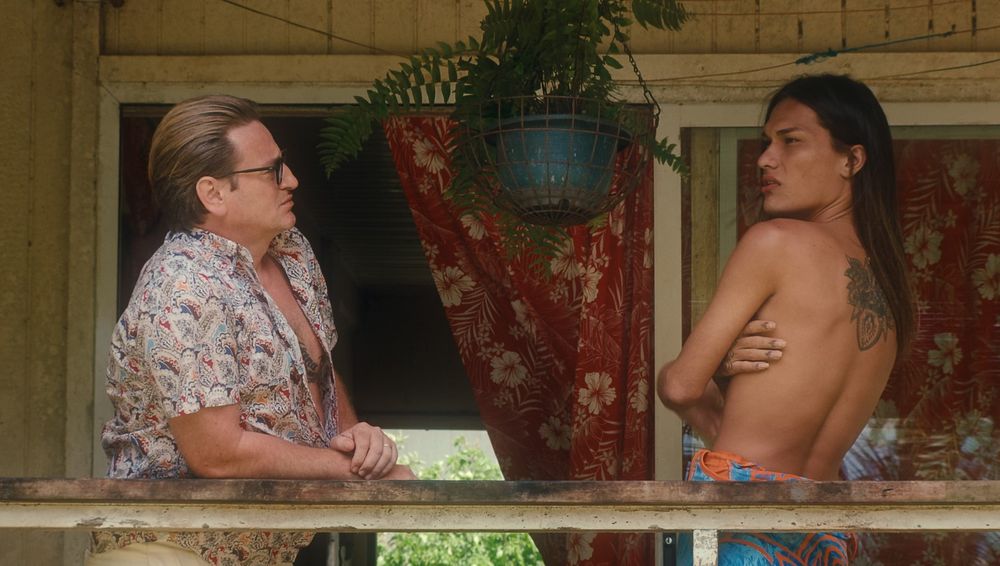 It works on many levels, taking its time in two hours and forty five minutes to create a portrait of an enigmatic man named De Roller (Benoit Magimel) who seems to say whatever thought pops in his head at any given moment, an odd duck not necessarily playing with reality, or so it appears. He is the top ranking French official in the Islands, the High Commissioner of the Republic who mainly describes himself to the locals as just a “representative of the state” as he endears himself to many of them. There are times he pours on the charm, always asking, “is there anything I can do for you? Let me know”. And he seems to be all-knowing on the surface, and constantly turning up everywhere, a whirling dervish if you will. He has his own playbook for discussion, mainly centering on a “rumor” – or is it more that he knows without letting on – that the Government is considering starting nuclear testing again on the island for the first time since the 90’s. A submarine he thinks he spotted in the ocean fuels this thought for him, and depending on to whom he is speaking, he presents it as something he has heard but not been told about, an act that he himself does not approve of as he tells one of the local Mayors and his associates when he flies to another part of the Island always engaging with the natives as if he was running for office. He even turns up on a jet ski in huge waves during a surfing competition where he tells one of the participants he is also available to help in any way. “I do what you do but in politics,” he says. 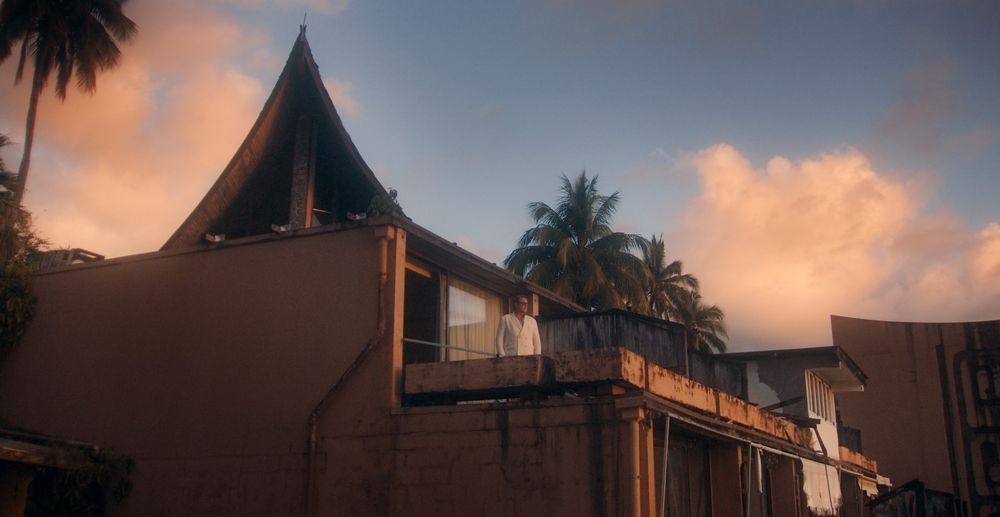 There are numerous other characters here with whom he interacts including a transexual with whom he has an undefined relationship, Shannah ( a terrific Pahoa  Mahagafanau), the Admiral ((Marc Susini), a very strange man who is supposedly head of the fleet and who utters things like “they will see by the way we treat our own people exactly how we will also treat our enemies”. That character goes in very surreal directions in the final reel which gets bizarre to say the least. There is also a nemesis in  Matahi (Matahi Pambrun), an opposition force with whom he butts heads showing a completely different side of his personality as the situation suits him. Veteran actor Sergi Lopez turns up as  Morton whose self-named restaurant where the staff is scantily clad is a major hang. There are many others including a mysterious guy in sunglasses who seems to eerily pop up at different points looking in on the action, commenting in English that De Roller is going to be drifting ever so much closer to darkness. All build on the enigmatic portrait of this man who it seems sees life as a mirage. Perhaps his true colors, or that predicted darkness, is the real deal as in a harrowing monologue he delivers on the actual motives of the French government who he surmises may not be planning just tests, but actually dropping a bomb on the place after that have bled it dry for all its worth.

Much of this seems a metaphor for today’s splintered and broken political strife, the distrust of governments (America, China, Russia all come into the equation) and the seeming little empathy they have for their people. As such Serra’s film is one of the more politically intriguing at this year’s Cannes, especially so because it is wrapped in such gorgeous packaging. Tahiti (where it shot for a month during lockdown giving the feeling of a largely uninhabited island) has never looked more alluring, the ideal of paradise as presented in a rather shallow way considering those “rumors” that it is indeed all a , uh, mirage. Cinematographer Artur Tort has a lot to work with and uses it all in rich ways.

The title Pacifiction is of course a play on words but seems to define De Roller as a man of many fictions – or are they? Magimel, who has a wonderful supporting role in a Directors Fortnight entry this year as well called Revoir Paris, seems made for this role, and it is a great one that needs a strong star turn to pull it off, but also an actor who can navigate the tricky waters of a uniquely  complex character. Dressed for most of the film in a casual white suit and hawaiian shirt (even on that Jet Ski), De Roller is a striking figure amongst the island populace. Magimel makes this guy his own and it becomes another high point in this fine actor’s sterling 35 year career.

A24 Gets ‘Close’; ‘Elvis’ Is In The Building; Latest Deals, Reviews & Video Interviews

Heard Testifies About Threats Over Countersuit; Closing Arguments Set: How To Watch

How The Upfronts Became Covid Superspreader Event: Felt Like “Risk Of Doing Business”