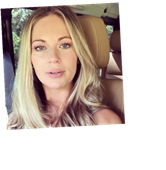 Late last year, we reported that Southern Charm had put the next season on hold to conduct a talent search.

Tragically, that talent search will have major — and majorly stylish — shoes to fill.

On Tuesday night, in an Instagram comments section of all places, Cameran Eubanks casually dropped some devastating news.

In light of delayed filming and of course the COVID-19 pandemic that continues to devastate the globe, a fan asked a simple question.

When would Cameran and her Southern Charm cohorts be returning to everyone’s screens.

Cameran revealed some stunning information in her reply: “I will not be returning.”

We here at THG are not the only ones who are absolutely devastated by this news.

“Please tell us that’s a joke!” one follower begged in response.

“You’re the voice of reason, the glue that holds them together,” appraised another. “This can’t be true!”

Look, we’re all going to miss Cameran, but please do not jinx 2020.

This year is sentient. It can hear you. And it will rise to any challenge that you throw at it.

This news about Cameran ditching the show comes as quite a shock.

At it, Cameran spoke about her husband, Dr. Jason Wimberly, guest starring on Season 7.

“Season 7 is going to be a very high opening season,” she teased.

Cameran told audiences that it would be significant “in terms of, you will see that some people have made some big strides in growth.”

“And some,” Cameran lamented in her Bravocon teaser, “have stayed the same, sadly.”

“Jason’s shy and private,” she said of her husband, “so I think that was kind of a little intro [to appearing on the show.]”

“I think you might see him again,” Cameran expressed, “now that he’s more comfortable.”

That was an exciting prospect … but we may never get to see it happen.

Obviously, it is crushing to think that one of the stars of one of the best gifs that I have ever made will be leaving the show.

The way that Cameran spoke about early in the season leads us to believe that they had already filmed.

Does this mean that they started filming late last year, then ditched the footage to start all over?

If so … was Season 7 going to be boring AF? If not, what happened?

The other really obvious question is what happened between Bravocon and now to make Cameran’s status change.

Did she quit? A lot of us are interpreting her comment as a statement about quitting the series, but that’s not actually what she said.

She said “I will not be returning,” a matter-of-fact statement that does not confirm or deny that it was her choice.

It’s hard to imagine Cameran getting fired …. but if she suddenly found herself without a storyline, that could happen.

Season 7 is happening. That said, Cameran is a real estate agent and a mother.

We have to consider that something — from the new filming schedule to real life demands — prompted Cameran to quit.

Cameran has been very sensibly concerned about safety, trying to get people to see it as an apolitical topic.

Did Bravo come up with a new film schedule that made her feel unsafe? Is she just sick of the drama?

We are desperately curious for answers and, frankly, still feeling a little in denial about this crushing news.

What will the show be like without Cameran Eubanks?

Kathryn Dennis: I Can PROVE Thomas Ravenel is an Unstable Liar!Start Gallery