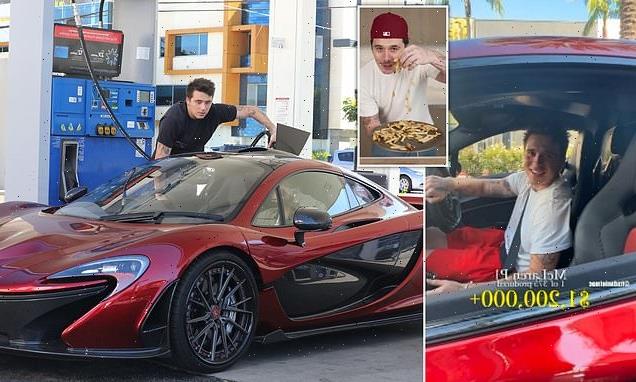 ‘What do you do for a living? You were BORN!’ Brooklyn Beckham is trolled by TikToker over his fledgling career as a ‘CHEF’ – after being grilled on how he paid for his £1MILLION McLaren P1 supercar

Brooklyn Beckham has been trolled by a popular TikTok star over his fledgling career as a chef after being asked what exactly he did for a living, which allowed him to afford his £1m ($1.2m) McLaren supercar.

The 23-year-old son of multi-millionaires Victoria and David Beckham was accosted by social media star and YouTuber Daniel Mac recently while driving around Los Angeles in his red McLaren P1 sports car.

Daniel, 24, approached Brooklyn to compliment his impressive vehicle, before asking what he does for a living to afford such a nice car – before gleefully teasing the celebrity offspring when he responded that he’s a chef.

‘Hey man, what do you do for a living? Your car’s awesome,’ the TikToker asked Brooklyn after spotting him behind the wheel of his car. 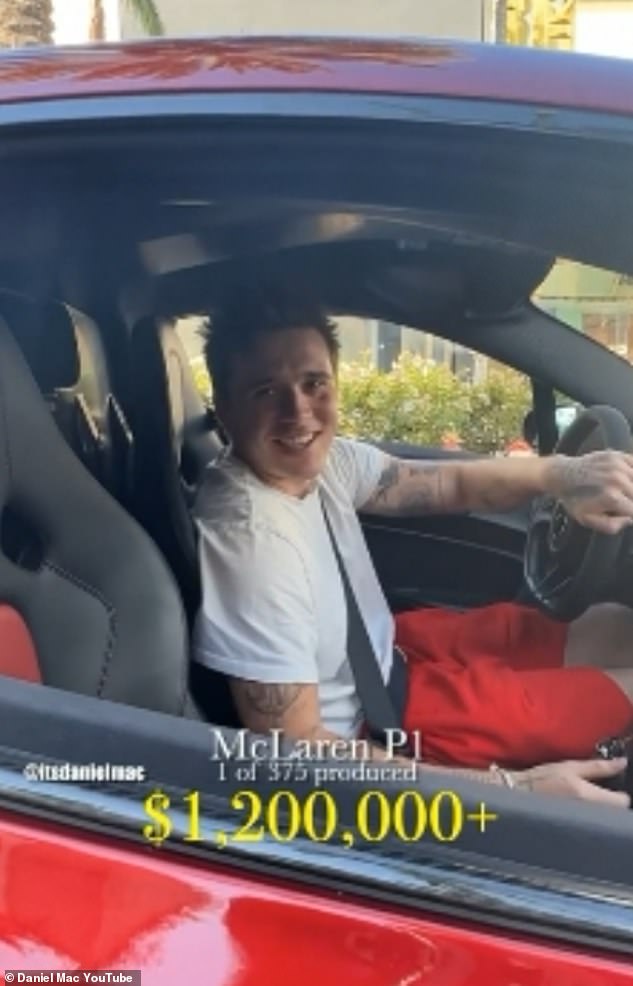 ‘What do you do for a living? You were born!’ Brooklyn Beckham has been derided for claiming he bought his £1million McLaren P1 supercar from his fledgling career as chef 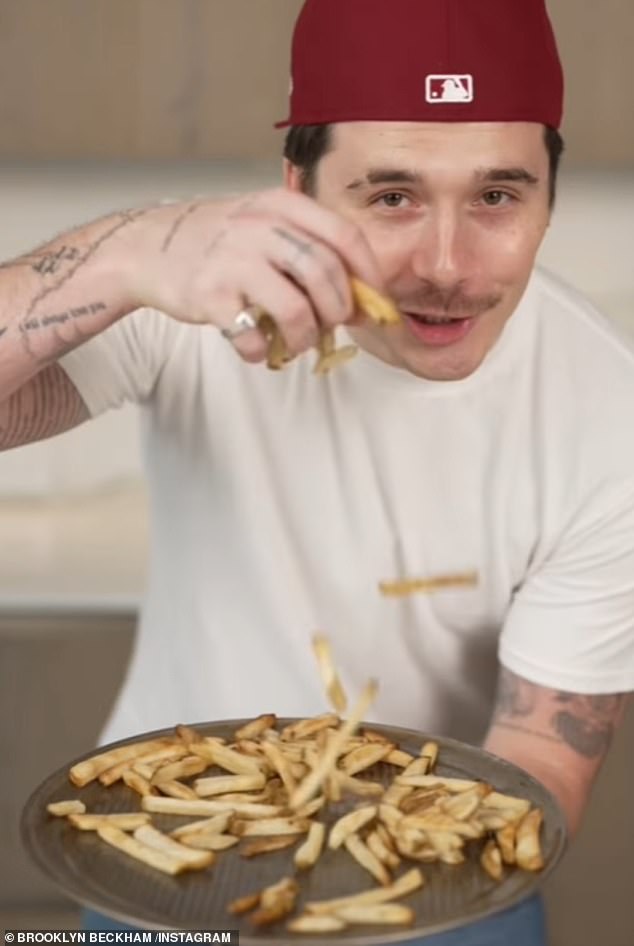 Cooking up new ideas: Brooklyn has revealed how he found his true passion in life through cookery – and is trying to be the ‘best chef in the world’

Bruh What Even Is A “Chef Name 😅💀@brooklynbeckham #mclarenp1 #p1

Daniel has become something of a star in his own right on social media, where he has gained notoriety for his videos in which he asks drivers of incredibly pricey vehicles what they do in order to earn enough to pay for such lavish cars.

But while the answers are typically linked to high-earning industries like finance or tech, Brooklyn offered up a very different response, pausing momentarily before replying: ‘Um, I’m a chef.’

‘Are you like the best chef in the world?’ Daniel teasingly him, implying that he would have to be incredibly successful to own a car like that just from cooking at his young age.

‘Trying to be,’ Brooklyn replies.

The video began with Daniel running up to Brooklyn as he drove past in his flashy red sports car, before leaning in with his camera and quizzing the budding chef on his profession. 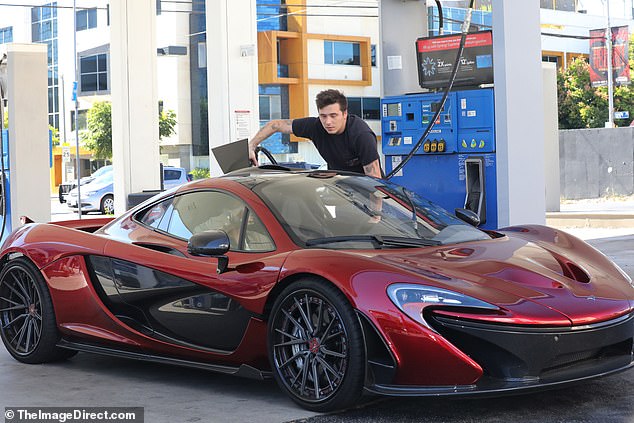 Filling up! Brooklyn was seen filling up his speedy motor on August 13

Since 2020, the TiKToker has racked up millions of followers online thanks to his hilarious videos in which he asks wealthy car owners what job they have in order to be able to afford their luxury vehicles.

The answers are often linked to jobs in real estate, private equity and tech – however many videos have gone viral thanks to more surprising responses such as ‘I’m a housewife’. 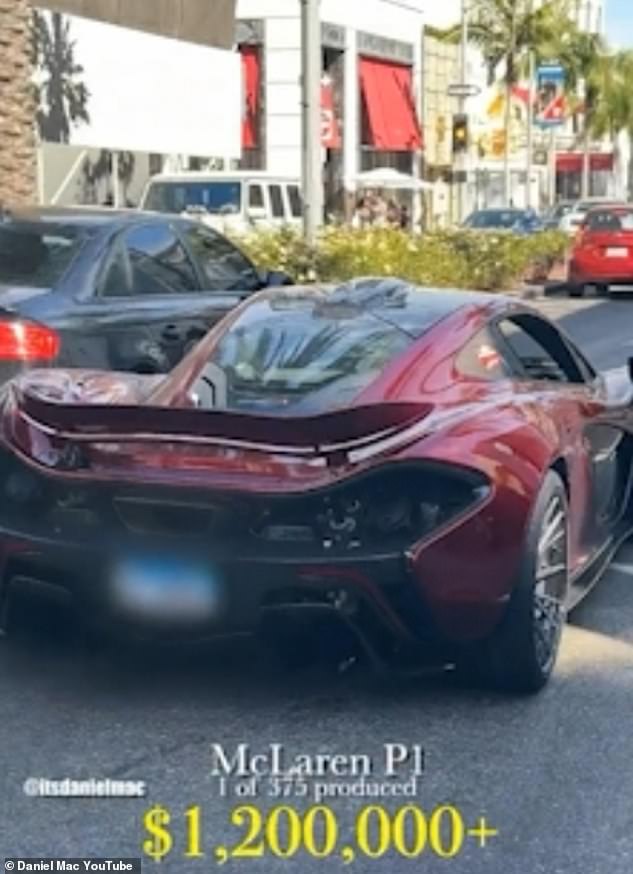 You got your money from where? Brooklyn’s parents have a joint net worth of £380million and his wife Nicola has a net worth of £42million. The Peltz family have a £1.3 billion fortune 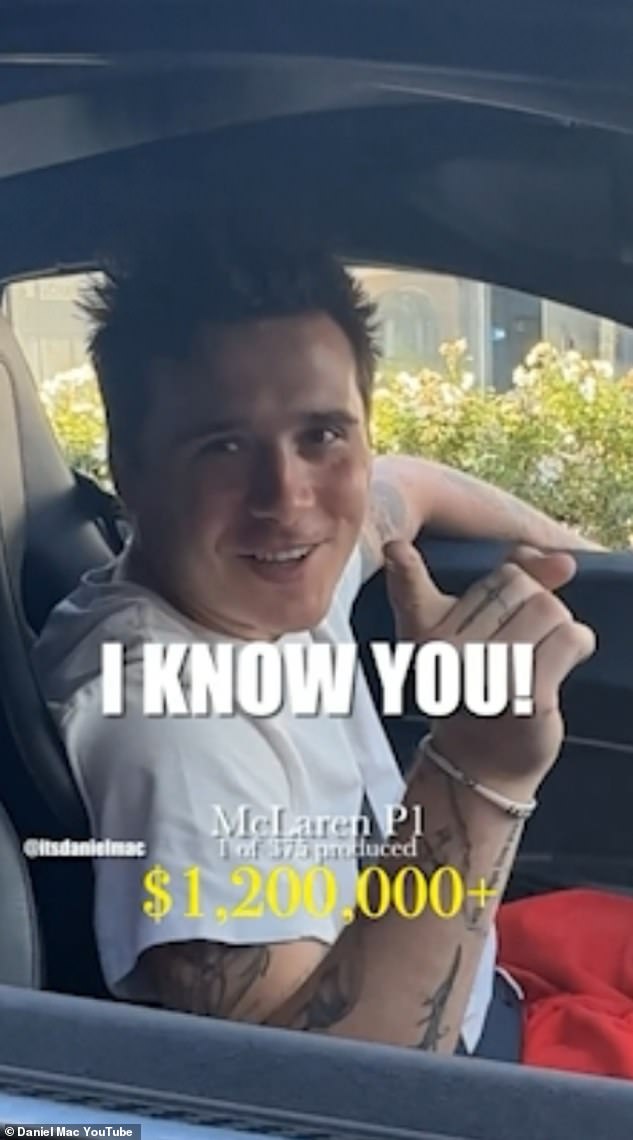 Sweet: Brooklyn probably couldn’t have won no matter what answer he gave – and at least he politely took the time to answer Daniel’s questions

In the video edit, the social media star even added a picture of Disney character, Remy – a rat who becomes a chef in the popular Disney movie, Ratatouille.

Daniel asks him: ‘What’s your chef name? If that’s a thing?’

‘My name’s Brooklyn’, he replies.

When Daniel asks if Brooklyn has any tips for those who want to get into cooking, the budding chef simply says: ‘Just follow your passion. Whatever makes you happy, just keep doing it.’

Brooklyn’s famous parents have a joint net worth of £380million and his wife Nicola Peltz has a net worth of £42million. The Peltz family has a £1.3 billion fortune. 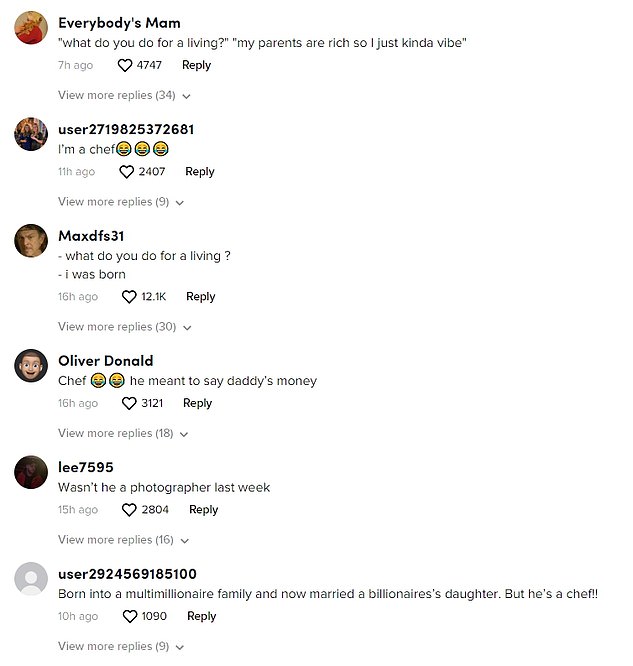 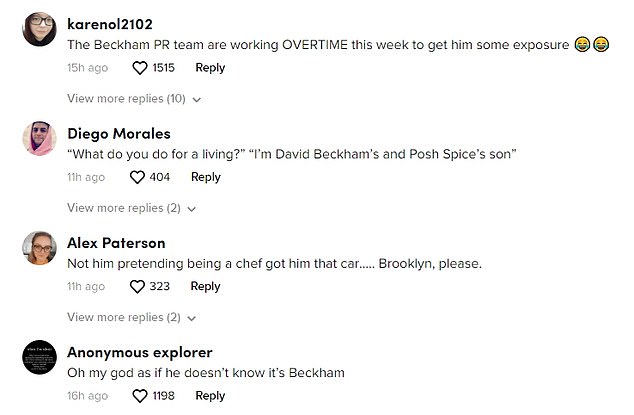 Brooklyn, please! Fans immediately called out the celebrity offspring for failing to mention that being born into wealth was a more probably explanation for his ability to afford the car

And while Brooklyn probably couldn’t have won no matter what answer he gave – and at least he politely took the time to answer Daniel’s questions – the comments section of the video were quick to point out the irony of his decision to claim that being a chef was the reason he could afford his car.

They wrote: ‘What do you do for a living?” “my parents are rich so I just kinda vibe”‘

DM: ‘Really? Are you like the best chef in the world?’

DM: ‘Any advice for people trying to get into cooking?’

BB: ‘Just follow your passion. Whatever makes you happy, just keep doing it.’

‘Born into a multimillionaire family and now married a billionaires’s daughter. But he’s a chef!!’

‘Not him pretending being a chef got him that car….. Brooklyn, please.’

‘Chef, The guy has never worked a shift in a restaurant in his life.’

‘my dad is a former footballer and my mum was a spice girl.. chef, I’m meant I’m a chef.’

‘I have rich parents and an even richer wife.’

‘I’m a chef but was a photographer like one week ago.’

Some fans were kinder and praised the eldest Beckham child for trying to stand on his own two feet, though they also felt he was wrong to claim he was a chef.

They wrote: ‘It’s a shame as he’s obviously trying to not be in his father’s shadow but the truth is that he doesn’t have that car by being a chef.’

‘bless him, didn’t even mention his surname or background.. how humble.’

Brooklyn has had a varied career so far, despite only being 23 years of age.

He was mocked when he decided he wanted to become a photographer at the age of 16, following a modelling stint in 2014.

He photographed a campaign for Burberry BRIT, but was slammed by various well-known snappers for his work.

In 2017 he enrolled in the Parsons School of Design in New York, but he left one year later because he was homesick.

He recently spoke of his hopes to open a pub in LA that serves ‘healthy comfort food’ and have a reality show with wife Nicola in a joint interview with Variety.

The star said he would ‘literally die’ for cooking, while dismissing his previous photography career – which saw him release panned 2017 book, What I See – as a ‘hobby.’ 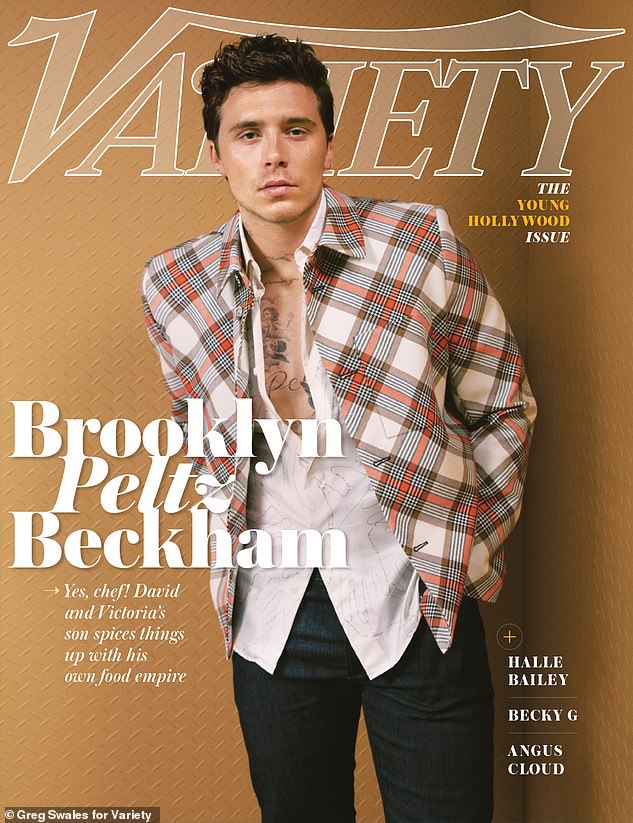 Smouldering: The 23-year-old son of David and Victoria Beckham spoke of his hopes to open a pub in LA that serves ‘healthy comfort food’ and have a reality show with wife Nicola in a joint interview with Variety 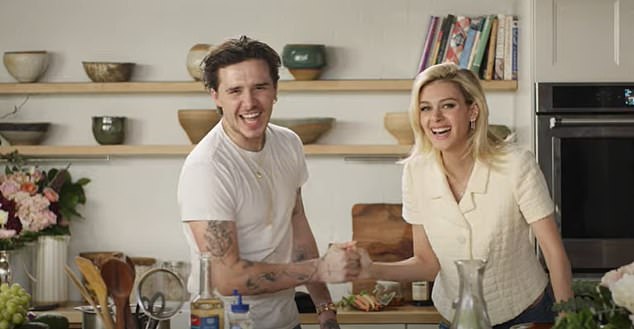 Fun: Brooklyn, whose own parents are one of the most influential pairings in the world, said he and new bride Nicola, 27, would love to do a reality show to show the dynamic of their relationship

He said: ‘I really enjoyed [photography]  for a couple of years. I love taking pictures of my wife. I still have all my film cameras, but now it’s just more of a fun thing to do. They were kind of all hobbies. I was still trying to find that one thing I would literally die for, and I found that with cooking.

‘I’m almost 100 per cent self-taught. Ever since the start of quarantine, I’ve done it every single day, and it’s the one thing I’ve found that takes my mind off of anything I’m thinking about.’

Adding that he’d love to serve ‘a healthier version of comfort food’ and that a pub could be the subject of a TV show, he also revealed he’s planning to launch a new sauce product later this year.

Brooklyn, whose own parents are one of the most influential pairings in the world, said he and new bride Nicola, 27, would love to do a reality show to show the dynamic of their relationship. 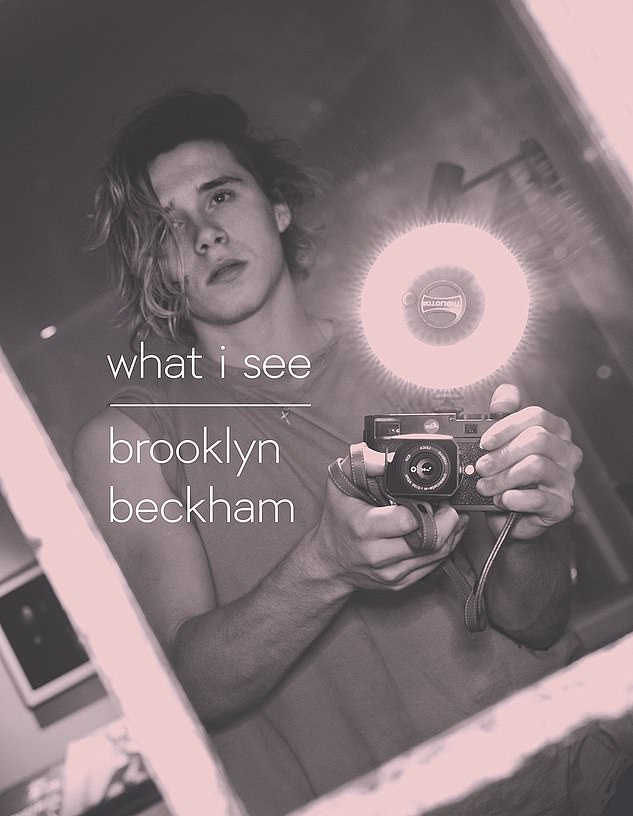 Not to be: The star said he would ‘literally die’ for cooking, while dismissing his previous photography career – which saw him release panned 2017 book, What I See – as a ‘hobby’

He said:  ‘I’ve always said to my wife, we should actually do a reality TV show, because she’s so funny,’ Peltz Beckham says. ‘And we take the p**s out of each other all the time. She sometimes doesn’t get my English humour.’

This would be following in the footsteps of his mother Victoria, 48, who famously appeared in 2007 documentary, Coming To America.

Brooklyn recently showed off his recipe for fish and chips on Instagram, despite having come under fire recently for his frequently-ridiculed cooking skills.

He said: ‘Some Americans find English food kind of gross, which I don’t understand.

‘But I cook fish and chips and pie and mash for my American friends, and at the end they’re like, “OK, I understand.” 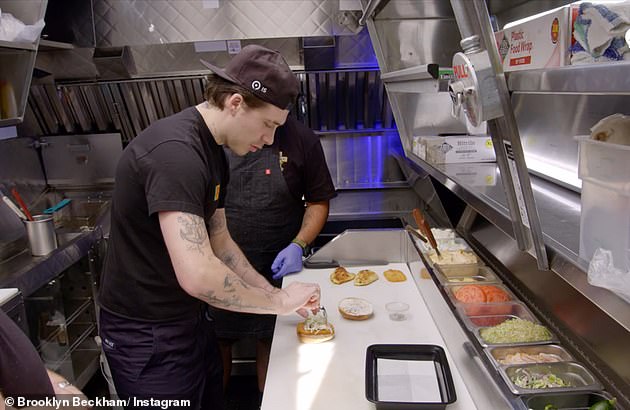 Cost: This comes after it emerged the budding chef enlisted a 62-person crew at the eye-watering cost of $100,000 to film him making a sandwich for a series

Critics have previously called attention to Brooklyn’s lack of training and expertise, while condemning the cost of his professionally edited Instagram videos.

A source has said of Brooklyn’s overblown crew and budget: ‘It’s unheard of. It’s the sort of crewing you would expect on a big TV show.’

The insider added that each episode of the eight-minute online show, costs $100,000 to make.

Brooklyn came under furious fire after landing a slot on The Late Late Show to plug his cooking career – despite having no professional training as a chef and boasting no personal claim to fame beyond his parents’ prominence.

The superstar offspring chatted to close family friend James Corden on the hit show – in a slot typically saved for esteemed stars with talents under their belt – during which he showcased his frequently-ridiculed cooking skills.

He shared details of his proposal to Nicola before challenging the fellow Brit, who has been close friends with his footballer dad for more than a decade, to a cook off – which viewers branded ‘cringy’ and ‘the definition of privilege’.

His appearance on the show was also slammed by several professional chefs.

Elsewhere in the interview, Brooklyn admitted he felt pressure to live up to his father David’s reputation as one of the world’s greatest-ever footballers, hence his decision to walk away from soccer at age 16 after being released from the Arsenal club as a youth prospect.

He said: ‘My dad wasn’t sad, because he was like, I just want you to be happy. But of course I was sad. It was my whole life since I was literally 2.

‘To try and live up to what my dad did in football, I was just like, that’s going to be a bit difficult.’ 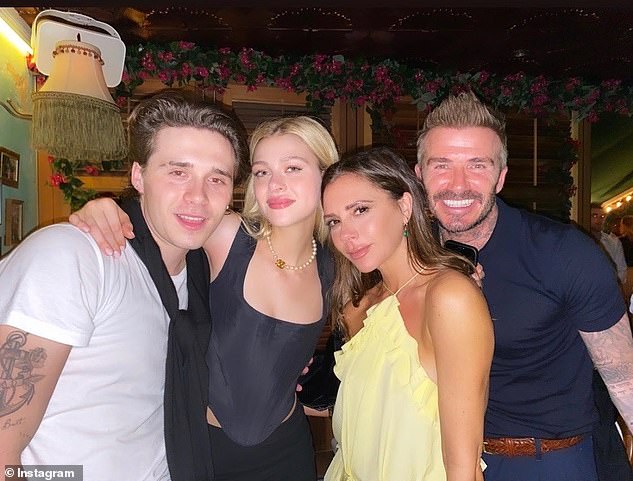 Hanging out: Brooklyn and Nicola pictured with his famous parents, Victoria and David  (pictured in March 2021)