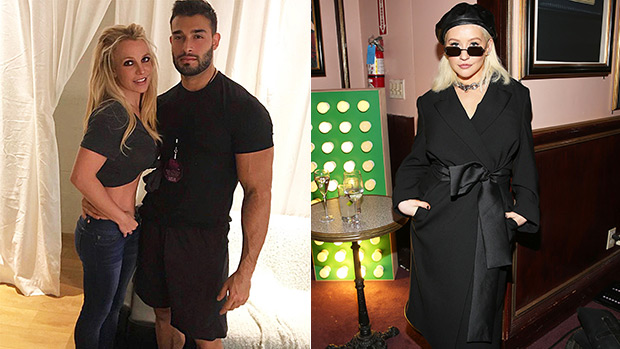 It looks like Britney Spears’ boyfriend has quite the sense of humor. Her man seemingly shaded Christina Aguilera during an Instagram Q&A, in an eyebrow-raising comment!

It’s the age old question: Britney or Christina? And it’s exactly the question that Sam Asghari, 24, boyfriend to Britney Spears, 37, answered on Dec. 19 during a fan Q&A. Of course, one would expect Brit’s beau to side with his lady, but instead, he gave a shocking comment about Xtina that has fans all riled up. “Christina who?” Sam said, in response to the fan’s burning question. It’s no secret that Britney and Christina Aguilera have been long-rumored rivals, so Sam just may have confirmed that these two are still far from friends!

Sam’s comment comes three months after we thought this rivalry between both icons was completely squashed. During an appearance on the Sept. 12, episode of Jimmy Kimmel Live, Christina got honest about the decades old feud, and even hinted about a potential collab with Brit! “When I was coming up, it was very obvious, you  know, me and Britney were definitely… there was the Britney/Christina considered rivalry thing,” she said of her relationship with Britney. “If we had social media back then, we would have probably done a song together and just squashed it,” she added. “It’s probably not too late for that,” she then said with a smile.

If Sam’s cheeky IG comment sounds familiar, it’s because we saw a similar situation happen back when Mariah Carey was asked about fellow superstar Jennifer Lopez. The scenario occurred back in the early 2000s when Mariah was asked by a member of the paparazzi about the singer. “I don’t know her,” Mimi replied point blank. Of course, it’s pretty hard to NOT know J. Lo, or Christina, so it’s no wonder fans instantly jumped to conclusions that these comments were shade-filled!

Fans cannot seem to get over Sam’s comment about Xtina. “People are dragging Sam Asghari (Britney’s boyfriend) over shading Christina! Freedom of speech. Let the man live. #Istandwithsam,” one fan said on Twitter. Although Sam later deleted his Instagram post, the Britney Army already got a clear picture of how Brit’s man truly feels!