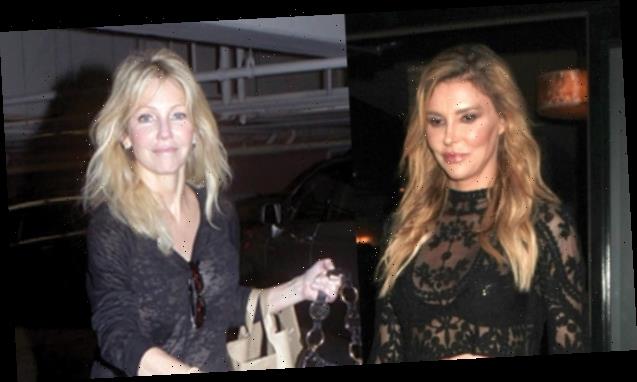 Brandi Glanville finally elaborated on her conversations with Heather Locklear! According to Brandi, Heather felt ‘sick’ about Denise Richards’ ‘spirit.’

Brandi Glanville, 47, opened up about the messages she has been exchanging with Heather Locklear, 58, amid Brandi’s televised scandal with Heather’s ex-BFF: Denise Richards! As this affair drama played out on Season 10 of The Real Housewives of Beverly Hills, Brandi first revealed that Heather “reached out” and indicated that she was “Team Brandi” during the Sept. 9 episode of Watch What Happens Live with Andy Cohen. A week later, Brandi revealed what exactly she has been discussing with the Melrose Place star in a new interview!

Brandi began with the same story she told Andy Cohen. “During this whole dramatic situation, during the reunion and whatnot, I get an Instagram DM from Heather Locklear who I literally grew up watching on TV and I was kind of starstruck,” Brandi explained to DailyMailTV in an interview published on Sept. 16. Further into the interview, the former RHOBH main cast member recalled two texts that she allegedly received from Heather.

However, Heather politely declined, according to Brandi. “Probably best not to show it because I’ll get a cease and desist, which she sent me years ago. LOL. I won’t even say anything. I support you fully,” Brandi recalled Heather messaging her. During her appearance on WWHL, Brandi said Heather also refused to talk about Denise on Andy’s talk show for the very same reason. Funnily enough, Brandi has also claimed to have received a cease and desist letter from Denise, after insisting that they had hooked up.

Regardless, Brandi and Heather are still “meeting for lunch this week” and “texting back and forth,” according to DailyMailTV. These ladies definitely have one thing in common: ruined friendships with Denise, which Brandi touched on even more during the interview.

“Denise told me that she didn’t know Heather, that they weren’t friends at all. And now I’m finding out completely the opposite,” Brandi claimed while speaking with DailyMailTV. Brandi found this comparable to her own situation, since Denise referred to Brandi as her “acquaintance,” and not past lover, amid the scandal. “And you know, Denise is now saying that she doesn’t know me and we weren’t friends at all. So I kind of see how she’s operating these days,” she added.

While Brandi’s beef with Denise is new, Heather’s drama with The Bold and the Beautiful star dates back to 2006. At the time, Denise began dating Bon Jovi guitarist Richie Sambora, who just so happened to have ended his 11-year marriage with Heather a few months prior. “I feel bad for her because I think that part of a lot of what Heather had to go through (in her marriage) was because of what Denise did,” Brandi said, but clarified, “Not that her husband was not part of the problem, but when you have a girlfriend and you think that you’re close, you don’t think you have to worry about your husband with that person.”

Like Brandi said, Denise insisted she wasn’t friends with Heather before dating her ex-friend’s ex-man. “I was no longer friends with Heather months before Richie and I got together. I don’t want to say what caused the split, but she and I weren’t even speaking then,” Denise told Redbook magazine in 2012.