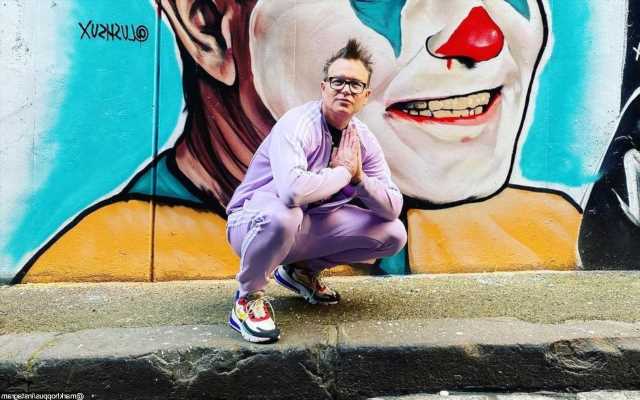 During a live stream, the bassist and vocalist of the rock band shares that he no longer feels as bad as he did, but he feels ‘bad longer’ amid the chemotherapy.

AceShowbiz –Mark Hoppus has offered an update on his health issue. After revealing that he is undergoing chemotherapy, the Blink-182 bassist and vocalist revealed that his stage 4 lymphoma cancer is “trying to kill” him.

The 49-year-old musician detailed his medical condition during a Twitch stream on Sunday, July 18. “My cancer’s not bone-related, it’s blood-related,” the rock star opened up. “My blood’s trying to kill me.” He went on to explain, “My classification is diffuse large B-cell lymphoma Stage 4-A, which means, as I understand it, it’s entered four different parts of my body.” He continued, “I don’t know how exactly they determine the four-part of it, but it’s entered enough parts of my body that I’m Stage 4, which I think is the highest that it goes. So, I’m Stage 4-A.”

Though so, Mark felt optimistic about beating the cancer and also revealed his mom had battled the same kind of cancer. “We’re beating this cancer. It’s just a matter of time,” he said, promising to his fans.

During the live stream, Mark opened up about the harrowing effects of chemotherapy and how it impacted him differently each time. “The second round of chemo, I just felt really weak and tired. And the third round, I started retching and [feeling] nauseous,” he admitted. He then added, “I don’t feel as bad as I did, but I feel bad longer.” Mark also said he was scheduled to see if the chemotherapy was working. “Ideally, I go in tomorrow and they say, ‘Congratulations, your chemotherapy has worked and you’re all done and you’ll never have to think about this cancer again for the rest of your life,’ ” he noted, adding, “And if they say, ‘Well, it’s really not working like we hoped,’ then I’ll have to go in [and] talk about other options.”

Mark first revealed his cancer diagnosis on June 23. Taking to his Instagram Stories, he penned, “For the past three months I’ve been undergoing chemotherapy for cancer. I have cancer.” He went on to share his feelings, “It sucks and I’m scared, and at the same time I’m blessed with incredible doctors and family and friends to get me through this.”