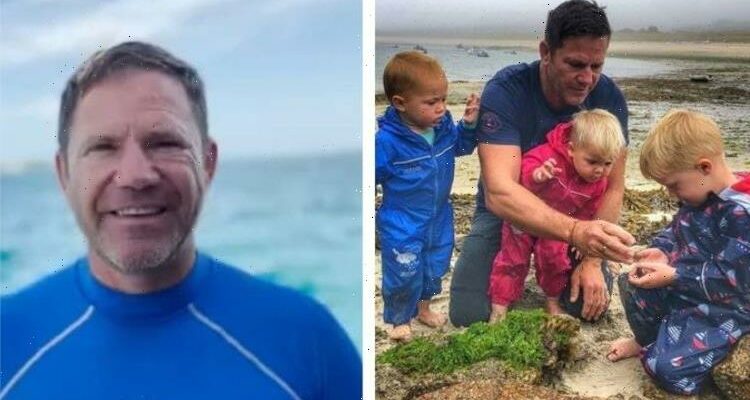 The BAFTA-winning explorer, whose adventuring and wildlife spotting episodes have been featured numerous times on TV, is clearly no stranger to risk-taking. Steve Backshall’s exploits have included diving with the likes of tiger sharks in a show about deadly predators, being bitten by a caiman in an Argentinian swamp and attempting a three month solo trek through the rainforests of New Guinea – a task which he couldn’t successfully complete.

However the 48-year-old has now addressed getting his children in on the act, while hitting back at criticism.

“People have questioned the wisdom of me taking my tiny kids up mountains, canoeing, tree climbing, surfing and horse-riding,” he told this week’s Radio Times: “And of course there are risks.”

However, he continued: “Surely the risks of not doing these things are more insidious?”

Steve is adamant that, especially after the many months of remaining cooped up over lockdown, there’s never been a more important time to get youngsters to experience the great outdoors.

“As a parent your instinct is to protect, to wrap your little angel up in bubble wrap,” he continued.

“When it comes to traffic, trolls and TikTok that’s a good thing, but grazes, scrapes and black eyes are an essential part of experiential learning.”

His views might be proving controversial amongst some protective parents, but he and Helen appear to be unapologetically raising their three as mini adventurers in the making.

“The young feet that tiptoe barefoot on the grass today, will tomorrow be filling big, grown-up shoes,” he explained.

Last year they proved that the sentiment holds true for them by bringing their tiny twin babies along to a rowing challenge event.

Helen posted on social media at the time: “The twins made their TV debut last night. They joined us for the @sportrelief rowing challenge #battleofthechannels.

“I love being able to bring the little ones along and show them what mum and dad get up to (tho maybe it’ll be a while til they join @backshall.steve on an expedition… “(sic)

He has also expressed to the Belfast Telegraph that it would be valuable for children to indulge in on-foot walking safaris around the Masai Mara – despite the fact that he has been charged at by elephants.

In the past, some parents have praised the daredevil for his “twin parenting/work balance”, admiring that Steve was an independent adventurer while also enjoying “quality time together” as a family with three tots.

When it comes to potential risk-taking, not everyone agrees with Steve’s nonchalant approach, but he says it’s vital for children to have “unstructured” outdoor play.

Steve has also suggested some not so risky ways that even urban children can get in on the outdoor action and experience nature.

These ideas include building bird boxes, bug hotels and even hedgehog homes.

Tickets for Steve’s new show, Ocean, are available via the Birmingham Hippodrome or Ticketmaster.

Plus this Sunday on UKTV Dave, his new Expedition series begins, with the first mission being “a truly epic first descent on Kamchatka whitewater; with the odd bear or two”.

One nervous fan, mad_lion_witch, replied on his Instagram post, which includes a video preview: “Maybe not a bear to cuddle!”

Meanwhile the full story from Steve on why battling “nature deficit disorder” and getting outside, regardless of age, is important to him, can be found in this week’s Radio Times magazine – out now.