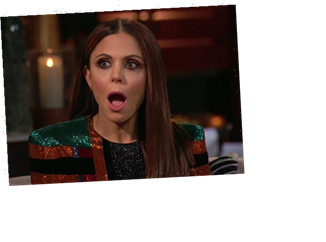 This week, Bethenny Frankel announced her engagement to Paul Bernon.

Her announcement just happened to coincide with another piece of news.

It was the same day that the RHONY trailer dropped.

Coincidence? No one thinks that. Especially not her former castmates.

An inside source spoke to Page Six about how the Housewives are reating to Bethenny upstaging them.

“They’re all confused why she’s still obsessed with RHONY,” the insider shares.

The source continues: “and would orchestrate her engagement news to come out the same time as the trailer for the show.”

“Bethenny is just being her petty self,” the insider characterizes.

“But,” the source notes, “she can’t take away the cast’s happiness.”

The insider continues: “Or how hard they worked this season during the coronavirus pandemic.”

“The cast collectively feels like the show is so much better without her,” the source alleges.

“And,” the insider adds, “that she wouldn’t have been able to navigate the serious topics of this season.”

At present, it is unclear who if any among the current Housewives reached out to congratulate Bethenny on her engagement.

Bethenny’s representative, however, says that Bethenny doesn’t give a flip about how the ladies feel about anything.

“Bethenny is living her best life and isn’t concerned with what the cast thinks,” her rep affirmed.

Additionally, the rep noted that Bethenny only confirmed the news after eagle-eyed fans spotted the engagement ring.

The ring that Paul slipped onto her finger when he proposed is said to be worth about seven figures.

One jewelry expert speculated that the ring has a $1 million value, due to the center stone being an estimated 8 to 10 carats.

“It looks like she wore a three-stone ring that features a huge 8- to 10-carat emerald-shaped center stone set,” the jeweler assessed to Page Six.

The jewelry expert continued: “with two smaller emerald accent diamonds we estimate to be around 3 carats total.”

“If it’s a real, natural diamond, I’d estimate its retail value at up to $1 million for a natural emerald-shaped diamond ring of that size,” the jeweler stated.

Bethenny and Paul began dating in 2018, as we reported at the time.

However, the two broke up two years later.

This pas January, they reconciled. Clearly, they decided to play for keeps this time.

As we noted, this season of RHONY appears poised to tackle — for better or for worse — some pressing social issues.

As with Beverly Hills when Garcelle Beauvois joined, this is a long, long overdue milestone.

In the trailer, Eboni is seen calling out Ramona Singer for her dismissive and outdated term for referring to “the help.”

Quite frankly, it is stunning that no one has spoken to Ramona about this before.

Or maybe they did, and Ramona being Ramona, she simply forgot. She is not generally seen as the brightest apple in the basket.

The new season premieres on May 4.

While some viewers are tired of seeing important issues tackled on reality TV … well, imagine how much more tired marginalized people are of oppression.

It will be interesting to see if Bethenny plans to upstage her erstwhile castmates in any other ways.