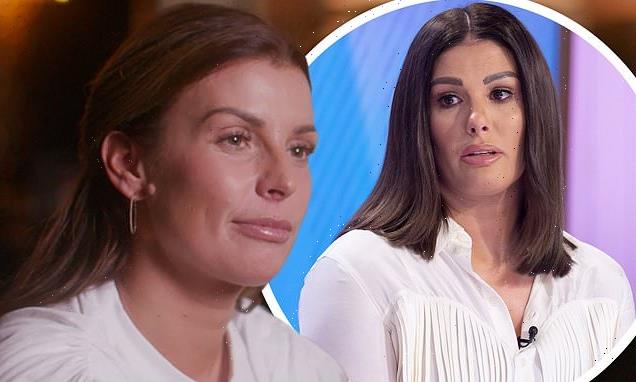 Becky Vardy has accused Coleen Rooney of ‘trying to destroy her’ as it emerged the star’s ex-husband has sensationally joined Coleen’s ‘team’ in the long-running ‘Wagatha Christie’ battle.

Rebekah, 39, is suing Coleen, 35, for libel at the High Court after the wife of footballer Wayne Rooney accused her of leaking ‘false stories’ about the Rooneys in October 2019, following the social media ‘sting operation.’ Rebekah denies the accusations.

The wife of footballer Jamie Vardy took to her blog in the wake of the news that businessman Stephen Clarke, 56, who she had a turbulent relationship with around 2005, had joined team Coleen.

In the past he has vehemently denied Becky’s allegations that he abused her during their time together.

Slammed: Becky Vardy has accused Coleen Rooney of ‘trying to destroy her’ as it emerged the star’s ex-husband has sensationally joined Coleen’s ‘team’ in the long-running ‘Wagatha Christie’ battle

She said: I feel the time has come where I may need to start speaking out a little more. It feels like a cruel threat to destroy the me that has survived.

‘I have already been quite open about how mentally vulnerable the abuse I suffered has made me.

‘This legal case has always been about clearing my name.

Drama: Rebekah, 39, is suing Coleen, 35, for libel at the High Court after the wife of footballer Wayne Rooney accused her of leaking ‘false stories’ about the Rooneys

‘It’s really important that women feel enabled to speak out about their experiences and not be shamed over them or have them used as a weapon against them.

‘Speaking out provides support to the thousands of women who are trying to find the strength to break the cycles and leave their relationships.’

Stephen is among the witnesses who have given statements to support Coleen’s case, according to sources.

He was tight-lipped about his evidence when approached by MailOnline.

A source said: ‘Steve Clarke was Becky’s second husband and knows her as well as anyone, so if he’s called to give his evidence in court, it could be a bombshell.’

In 2017, Becky claimed in an interview with The Sun that their 10 months together when she was in her early 20s was ‘hell’.

She said: ‘I know marrying three times makes me sound like Zsa Zsa Gabor, but after a difficult childhood I made some stupid mistakes and went out with some real-life snakes!’

Becky began dating Stephen, her boss at a timeshare company, after her first marriage to Mark Godden broke down.

She said of her marriage to Stephen: ‘That quickly became a horrible relationship — I was scared of him. He’d tell me what to do, where to be and how to act.

Outcry: Becky took to her blog in the wake of the news that Stephen Clarke, 56,  (pictured) who she had a turbulent relationship with around 2005, had joined team Coleen – In the past he has vehemently denied Becky’s allegations that he abused her during their time together

Fury: Becky spoke about domestic violence in her emotional post

She wed Mr Clarke when she was 23 and eight months pregnant by another man. She said: ‘It was the biggest mistake of my life.’

Mother-of-five Becky told The Sun: ‘As soon as she was born he made us move abroad. He claimed he owed money and wanted us to run away to Cyprus.

‘It went downhill from there. He became violent towards me. He cheated, he lied.

‘It lasted ten months before I escaped back to the UK with my baby after he cheated on me.’

Weeks later Clarke was sentenced to two years’ jail after his conviction for causing death by reckless driving in a head-on crash which killed a dad and grandad.

His car had steered into the opposite lane on a Paphos road.

Becky said: ‘He got his divorce papers for unreasonable behaviour while in prison. I was devastated at another failed marriage — now I realise I had a lucky escape.’

But Stephen told the newspaper: ‘I was always a good husband and I never cheated on Becky or ever raised my hand to her. I am devastated two people died. It was a terrible accident.’

He also won a complaint against The Sun with press watchdog IPSO after they failed to report his denial of having ‘made’ Becky sell a kiss-and-tell story about her one-night stand with Peter Andre.

When approached by MailOnline, Mr Clarke refused to comment.

This comes amid claims Coleen  carried out a ‘dummy run’ before launching her Wagatha Christie investigation.

Claim; This comes amid claims Coleen carried out a ‘dummy run’ before launching her Wagatha Christie investigation (pictured last week)

Court documents that The Sun claim to have seen outline the lengths the WAG went to as she tried to identify who was leaking the stories from her inner circle to the press.

The publication claimed Coleen started her operation back in January 2019 after a series of personal stories were leaked.

The mother-of-five eventually realised her private Instagram account was the source, and sifted her way through 300 accounts of ‘trusted friends and family’ in order to draw up a list of possible suspects.

Coleen used Instagram to post a number of stories about her private life, claiming that she eventually narrowed down who could see them until they were only accessible to Rebekah.

All but five of the posts were seen by Jamie Vardy’s wife Becky, according to Coleen.

Some of these stories, which were deliberately false, then appeared in the media.

She famously wrote: ‘I have saved and screenshotted all the original stories which clearly show just one person has viewed them. It’s ……………. Rebekah Vardy’s account.’

And as part of their court battle, the documents detail the five exceptions and also two dummy posts, which ran in April 2019.

Coleen claims the dummy posts were seen by Becky and one other person – but she says she could not recall the identity of the other individual.

Statement: The feud between the WAGs erupted after Coleen revealed that she had set a trap to see who was responsible for the leaks, which earned her the nickname ‘Wagatha Christie’

Another of the posts was seen by former Manchester United midfielder, Tom Cleverley, while two others were seen by unidentified individuals.

According to The Sun the court documents claim none of the posts were leaked to the press.

The Sun says the documents state: ‘This led to her belief that it was the Claimant who was responsible for the leak, given her established history and habitual practice of providing private information to journalists and the Press.

‘The Defendant had also heard rumours that the Claimant was responsible for similar leaks or disclosure of private information from other so-called WAGS or celebrities.’

Feud: Coleen first accused Becky of leaking ‘false stories’ about her private life in October 2019 after carrying out a months-long ‘sting operation’ (pictured in 2016)

MailOnline has contacted Coleen and Rebekah’s representative for a comment.

It come after the news that Coleen is set to sign a £1million deal to make a documentary film about her WAG war and libel battle with Rebekah, according to a report.

The Mirror claims Coleen will ‘present all her evidence against Becky’ in the documentary and that filming could begin as early as the New Year, ahead of the libel trial due to start in summer.

A friend of Coleen told the publication: ‘Coleen has remained quiet ever since that famous online post. But this could all change in what could be the TV event of the year.

‘Viewers would see all the evidence that Coleen has forensically gathered via her online sleuthing and see why she is convinced that Rebekah leaked the stories about her and others.

‘She is minded to get it all out into the pubic domain and let people make their own minds up. Talks are very well advanced.’

‘Coleen is thinking long and hard about her next steps and the time could be right to stick her head above the parapet. She feels she has a very strong case and wants to share it with the world.’

The friend added that Becky’s team would see the show as a ‘hostile act’ ahead of the trial, but said Coleen was ‘on a mission’.

The show is reportedly being made by Lorton Entertainment who are also making her husband Wayne’s football documentary titled Rooney.

MailOnline contacted representatives for Coleen Rooney, Rebekah Vardy and Lorton Entertainment for a comment at the time.

Awkward: Earlier this summer Jamie Vardy was dragged into the ‘Wagatha Christie’ court case after Coleen’s legal team demanded the Premier League footballer, as well as wife Rebekah, hand over their mobiles to be inspected for evidence