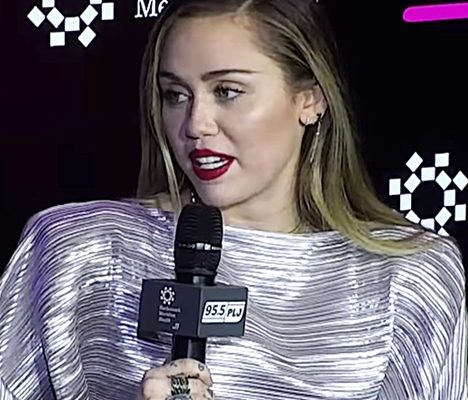 Promoting her new collab with Mark Ronson, “Nothing Breaks Like A Heart,” Miley Cyrus stated clearly that she will be working on her upcoming album with both Mark and Bangerz-producer Mike Will Made-It in an interview aired on New York area radio station 95.5 PLJ.

Besides Mark and Mike, Miley mentioned that she is also working with Andrew Wyatt of Miike Snow. She did not confirm either way if recent pictures of her in the studio with Theophilus London are related to her upcoming or a different project

Miley spoke a little about what each confirmed producer will be working on. “A song that [Mark] and I have done together,” Miley said, “is a more rock driven [and] modern like Debbie Harry or kind of like Joan Jett.”

That sure sounds like a return to some of the elements that Miley found success with on her Bangerz album. Making the connection between her new music and Bangerz even more clear is Mike’s participation. Miley worked with the hip-hop and R&B producer on Bangerz back in 2013. But Mike was not a formal part of the picture for Miley Cyrus & Her Dead Petz or Younger Now.

You can watch Miley’s full interview below.