Becca Kufrin isn’t doing much to quell those split rumors swirling around her and fiancé Garrett Yrigoyen.

As we previously shared, the former Bachelorette couple has been on the rocks ever since Yrigoyen voiced his “tone-deaf” support for police officers last month as protests for George Floyd and the Black Lives Matter movement were held across the country. Based on a recent update from the 30-year-old reality TV starlet, it doesn’t exactly sound like the pair have moved on from this hurdle in their relationship…

During Tuesday’s episode of the Bachelor Happy Hour podcast, Kufrin vented to her co-host Rachel Lindsay about how tough this year has been for everyone while highlighting her own personal struggles:

“I mean 2020 for me personally—and I think for a lot of people in not only our country but our world—it’s testing us and there are so many different factors. COVID is still a thing and because everything else that’s taking place is at the forefront, sometimes I forget, like, ‘Oh, my God. We’re living through a quarantine and this shutdown and people are dying.’ Like, there’s so much going on in this year.”

Becca said that although 2020 started professionally “on a high,” she continued explaining that things have been challenging lately:

“It was easy sailing and now I look back just to a couple of months ago and I feel like I was at a totally different place in my life, like, a completely different mindset. With everything happening, I feel like I’m being tested.”

“I’m learning a lot more about myself and my friends and my family and just having new conversations that I’ve never had before in my life. And so yeah, good days, bad days, thank god for Minno because she keeps me sane. She is like my therapy pet.”

Hmm. Despite being very candid about the status of her relationship on the platform before, Kufrin declined to immediately comment on where things stand with Garrett now.

While Bachelor Nation fans remain in the dark on that subject, many have speculated that being “tested” is a coy reference to the public disagreement the couple shared over supporting law enforcement. The fact that Becca and her fiancé spent the Fourth of July weekend apart definitely fanned the flames of those split rumors. Although, she did show Garrett a little social media love by liking and commenting on some of recent posts including one video about couples in quarantine. 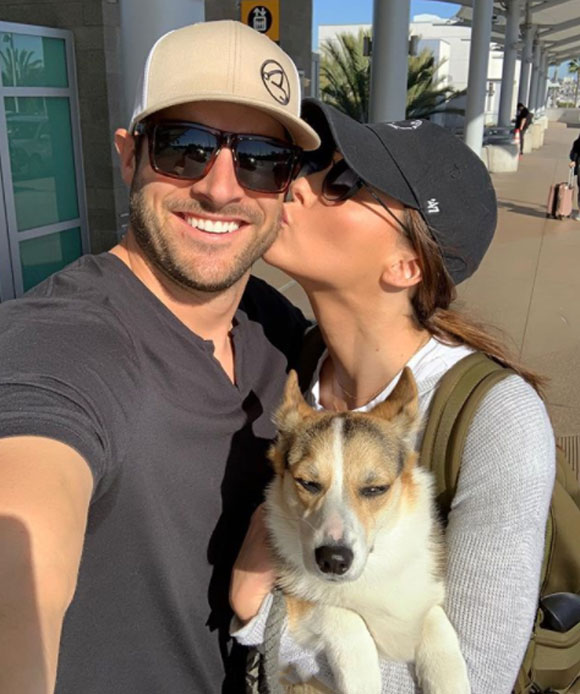 In case you needed a refresher, here’s the last thing Becca told listeners about Garrett and the whole “Thin Blue Line” fiasco back in June:

“For those who are curious about my relationship with Garrett at this point, all I can say right now is that I don’t know. I can’t give anything more than that. It’s something that we are trying to work through and discuss and do work on at home at this time and that’s where the work will remain and that’s really the best I can give you at this point.”

And on Tuesday’s podcast episode, she seemed to hint things haven’t really moved past that point:

“You want to try to put on a brave face, but I think I’m learning that that’s not the case. This is not the year to do that and to pretend everything’s perfect. So just going through the motions. Thank god I have a great support group and friends and family but I’m learning a lot. 2020, it’s been a lot. But I look at it as, I would never want to not do 2020 for as many crazy things that have happened. So that’s kind of where I am.”

We’ve asked it before and we’ll ask it again! Do U think Becca and Garrett can come back from this, Perezcious readers?