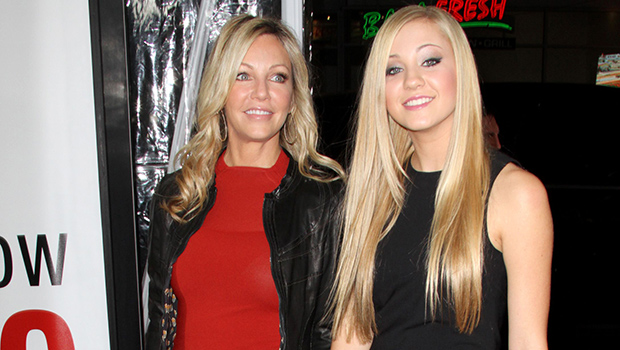 We’re seeing double this Christmas, and not because of eggnog! Ava Sambora’s new bikini picture is the spitting image of Heather Locklear, who just returned home for the holidays.

Mom-daughter duo Heather Locklear, 57, and Ava Sambora, 21, have returned home to Los Angeles on Dec. 22, per People, and Ava reminded us of the reunion with her Christmas day post! The college student, who just returned from a vacation in Hawaii with her dad (Heather’s ex-husband Richie Sambora), shared a memento from the trip in which she looked like her mom’s twin. “I’m dreaming of a sandy Christmas,” Ava wrote alongside a photo of her in a white bandeau bikini at a beach on the Big Island. See the picture below that’s giving us flashbacks to Heather’s Melrose Place days.

Heather will be home for “a few days for the Christmas holidays” with boyfriend Chris Heisser, and Ava has already “gone to see Heather at at her home” before the actress returns to her inpatient treatment center, according to People’s report. The source added that Heather is “doing well,” and is “smiling and happy to be out.” Heather is on a temporary leave from her third stint in rehab in 2018, which stemmed from a “mental heath breakdown” that eventually led to an involuntary psychiatric hold in November, according to the same outlet.

The Dynasty star also reconnected with her daughter for her 21st birthday on Oct. 5, just a week after leaving a three-month stay at rehab, according to Radar Online. Before her third trip to rehab, Heather had sought treatment in July, following an arrest and alleged overdose in June.

I’m dreaming of a sandy Christmas

We wish Heather and her family the best as the actress continues treatment. Ava also shared a picture of her Christmas tree on Dec. 25 — see it above!