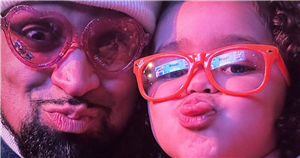 Presenter Ashley Banjo has enjoyed some rare downtime with his family, including his soon-to-be ex-wife Francesca.

The 34 year old announced that he separated from his wife Francesca Abbott last year, much to the surprise of his fans.

Ashley and Francesca had been together for 16 years, first meeting as teenagers before marrying in 2015.

However, the couple remains committed to co-parenting their young children and shared several clips of their day out in London on their Instagram accounts.

The Dancing on Ice judge shared an adorable photograph of his four year old daughter Rose, who dressed in a pink dress and matching heart-shaped sunnies for the family outing.

Dotting dad Ashley was also seen wearing glittery sunglasses, as the pair posed for a picture at the Lyric theatre before watching Blippi: The Musical.

Youngest Miach also joined in the selfies with a hilarious photograph of the father and son, starring down at the camera.

The caption read: “Not his best angle tbf,” with a crying laughing emoji.

Mum Francesca also shared her own picture of Rose, showing the little girl in her sweet gingham dress as she sat beside her cousin.

Later commenting on the sunglasses, Francesca told fans that toy glasses had been the “best £1 Primark buy ever!“.

Francesca also shared a clip of the family walk through London’s iconic Piccadilly Circus together, which was originally posted on her sister-in-law’s account.

It’s not the first time the family have reunited, with the former spouses spending Christmas Eve and New Year’s eve together.

Sharing several pictures from the festive period, Francesca even included one of her estranged husband just days after she separated from the Diversity star. It showed the presenter cuddling his children as they smiled for the camera, posing with foam swords on Christmas day.

Prior to this, the couple had released a heartfelt joint statement which shed light on their decision to split.

“After much thought and consideration we both feel now is the time to share some personal news.”

"Nearly 18 months ago we took the difficult decision to separate. After being together for over 16 years, since we were teenagers, this is not a decision that has been taken lightly.

They added: “It has not been easy and the processing of the situation has not been fast by any means. But we feel that as we approach the new year it is time to share this news with others.”

The heartbreaking statement ended with the couple declaring that they still remained the best of friends.

“Sometimes after so many years people just move in different directions, but we do so lovingly and we continue to try and be both the best parents possible and the best of friends to each other.”

Despite a difficult 18 months for Ashley, the star is in the midst of a career-high after receiving an MBE from Princess Anne in 2022.

The presenter will also be back on our screens later this month, as the new series of Dancing on Ice begins.