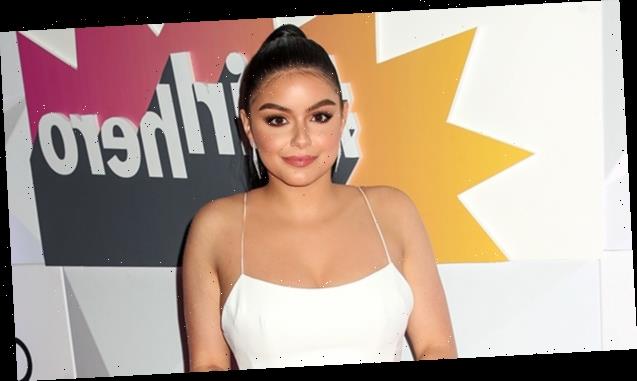 Ariel Winter took to Instagram on Nov. 12 to share a stunning photo of herself showing off a flattering white bustier and captioned it with a cheeky admission about pizza.

Ariel Winter, 21, is looking better than ever but she still wants a yummy treat to go along with her amazing figure! The Modern Family star showed off her long dark locks while wearing a tight white bustier in a new pic she posted to Instagram on Nov. 12 and it was quite the gorgeous sight to see! She gave off a cute smile in the photo and in the caption, she admitted she was having a very specific craving: pineapple pizza! “me thinking about pineapple pizza 🤤YES I MEAN JUST CHEESE & PINEAPPLE FIGHT ME💥🥊,” the caption read.

Fans took to the comments section of the pic to compliment Ariel and her choice of food. “You’re so pretty!” one comment read. “nice photo Ariel you look really stunning in this outfit,” read a second. “I’m actually with u on that pizza,” another fan wrote.

Since Ariel is known for losing some weight over the past year, her craving may be a bit of a shock to some, but the actress doesn’t seem to mind enjoying a treat every now and then. Before her latest post, Ariel stunned in a blue sheer mini dress at her co-star Nolan Gould‘s 21st birthday bash in Las Vegas, NV on Nov. 8. She posed for flawless photos, proving she’s living the single life with confidence and style.

me thinking about pineapple pizza ?YES I MEAN JUST CHEESE & PINEAPPLE FIGHT ME??

Ariel and her longtime boyfriend Levi Meaden, 32, broke up at the end of Aug. but they still seem to be on good terms as they were spotted hugging during an outing after the split and it turns out the brunette beauty is actually enjoying her new relationship status. “Ariel is doing really, really well and very much acting like a single lady right now,” a previous source EXCLUSIVELY told HollywoodLife. “She is living her life and doing fine despite the split from Levi. It was her decision, so she’s good.”