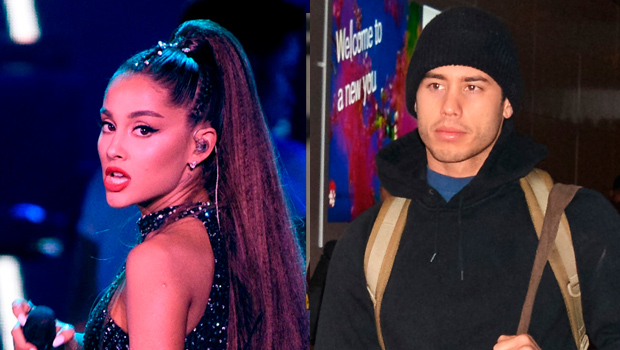 Everyone, lower your arms — let’s stop reaching. Ariana Grande’s compliment for ex Ricky Alvarez was misinterpreted for something more, and the pop star had to tell a fan to chill!

Let’s make it clear — Ariana Grande, 25, wrote only Big Sean “could still get it” in her “Thank U, Next” Burn Book! Otherwise, fellow ex-boyfriend Ricky Alvarez, 26, got the “friends forever” note in her book, a relationship status that she once again pointed out on Dec. 10. The pop star’s former boo and backup dancer debuted his new buzzed and blonde ‘do to Instagram on Monday, and Ariana appeared to approve of the hair makeover. “These colors are sick,” she wrote, which excited one fan in particular.

“WHATS ABOUT YOU AND ARIANA???? WE ALL WANT TO KNOW,” the fan account wrote. To be fair, it was a feed dedicated to the Ariana x Ricky pairing. “We’re friends everyone take a big ol breather 🖤,” the “Sweetener” singer replied, quieting any hope that this romance is picking up from where it left off in 2016. But she didn’t have to remind us twice, judging by the lyrics she dedicated to Ricky in “Thank U, Next.” In the single’s first verse, she sings, “Wrote some songs about Ricky / Now I listen and laugh.” If that sounds like a snub, it really isn’t — Ricky filmed a video of him listening to the line with mock shock, to which Ariana replied on her Instagram Story, “I’m sorry u got the worst line…it was meant v lovingly.” Clearly, they’ve moved past any awkward history — donut licking included — for casual Instagram exchanges.

There’s yet to be a “next” for Ariana, who has remained single since breaking off her engagement with Saturday Night Live performer Pete Davidson, 25, in October. The forecast for her love life even became a bit gloomy on Dec. 1! “Actually… i don’t want no ‘next,’” she announced in a now-deleted tweet. “True love doesn’t exist. hope you’re having a great day!” Acknowledging her angst, the pop star later wrote, “True love might exist i was just hungry.” We all post hangry musings about love, don’t we?

Ariana is all about friendships in the era of “Thank U, Next.” She even bought seven matching “engagement” rings for her BFFs in November during a tipsy trip to Tiffany & Co. There’s no need to run back to your ex when you’ve already got a (friendship) ring on your finger!