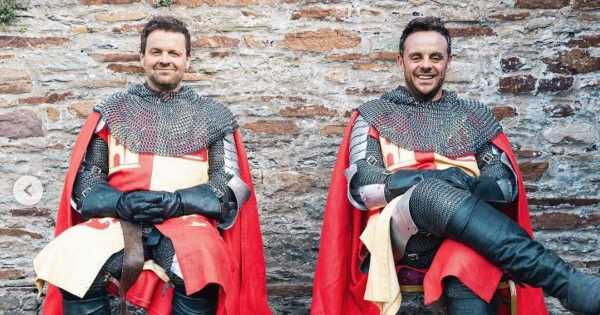 Ant and Dec have already begun ramping up the excitement over the new series of I'm A Celebrity… Get Me Out Of Here! this year as they shared a hilarious snap of them posing in knight costumes.

The popular presenters and ITV hosts posed next to each other on chairs in front of what appeared to be the Welsh Gwrych Castle where this year's stars will reside.

Dressed in full medieval garb, the pair looked pleased as punch as they grinned for the cameras and geared up for the show's grand launch later this month.

"A day in the life of a (modern day) knight #ImACeleb," the duo captioned their post.

In another snap, the pair joked about being "modern" knights as Ant McPartlin and Declan Donnelly stared intently at their phones.

Fans were thrilled and shared their excitement for the show to return.

"All dressed up and ready to battle at Gwrych Castle!" one person exclaimed excitedly.

Another joked: "Lol two good looking knights you can come to my rescue any time xx."

"Absolutely can’t wait to watch I’m a celeb," a third shared, followed by one fan gushing: "LOVE THE OUTFIT BOYS!"

It comes as Good Morning Britain presenter Richard Madeley made comments alluding to the rumours he's set to take part in the show and some Bushtucker trials this year.

During a chat on the ITV news programme, the 65 year old journalist told his co-host Susanna Reid that today, November 3, was his last time on GMB until after Christmas.

"Now I've got places to go and people to see and things to eat… Interesting things to eat," Richard teased viewers, as Susanna, 50, pressed her co-host to reveal where he was going.

"I'll be back very soon after Christmas. This is my last show for a while," an evasive Richard replied, and Susanna pushed even harder for the presenter to reveal the truth.

After asking him what "goodbye" was in Welsh, Susanna then hinted everyone will "find out in a couple of weeks".

The rest of the line-up is rumoured to include the likes of Little Mix singer Jade Thirlwall and EastEnders legend Adam Woodyatt.

But fans will have to wait and see as ITV always remain extremely tight-lipped about their famous names until a few days before the show launch.

I'm A Celebrity… Get Me Out Of Here! launches on ITV this month.

For all your latest updates on I'm A Celeb, sign up to OK!'s daily newsletter.