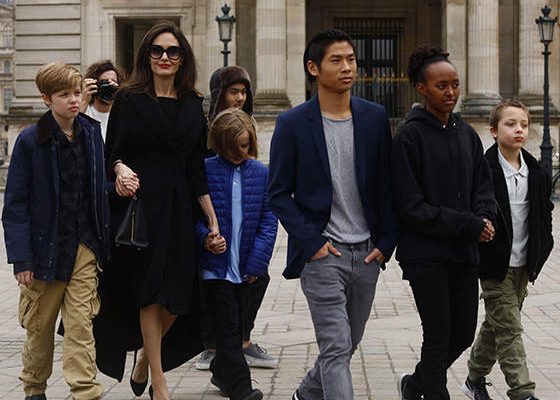 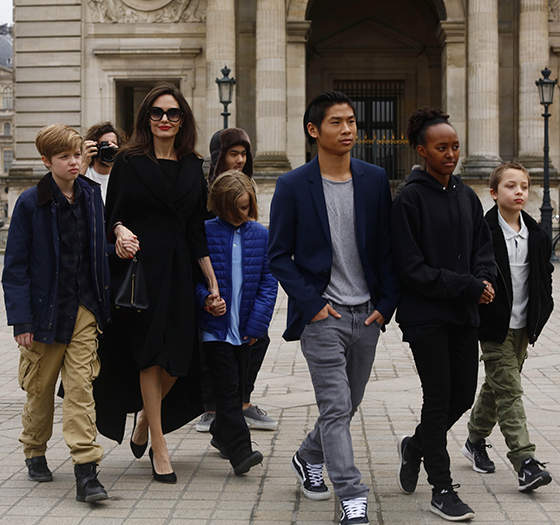 Now that her divorce with Brad Pitt has moved past the custody phase (I think? Like I don’t want to jinx her), Angelina Jolie is starting the follow-up struggle: recovering her tattered public persona. It’s hard to come out of a malicious divorce without looking like an evil bitch, and considering how many “sources” were popping up to spill some tea, Angie definitely didn’t. But here she is talking about her kids, so how can she be a bitch?

During that BBC Radio 4 Today interview where she threatened to go from Saint to POTUS, Angie talked about how she’s successfully raised her kids into a beautiful mosaic of cultural differences and awareness.

“I think my children have learned the most about these issues simply from each other, from experiencing each other. They are from different backgrounds, they don’t deny the difference—they celebrate the difference.”

Maddox is from Cambodia, Pax from Vietnam and Zahara from Ethiopia. And of course those other three, Shiloh, Knox and Vivienne are white. But just because the kids are American Caucasians doesn’t mean they aren’t culturally sensitive and aware:

“Shiloh, for example, is the one that’s learning Mad’s country’s language, and Vivienne wants to live in Zahara’s country. So just because they’re from a place doesn’t mean that that’s everything that defines them.”

Oh, and these kids sure are WOKE. Angelina Jolie is culturing the fuck out of them:

“I got Zizi a little black doll and I got Shi a little white doll, and they switched dolls… and then I realized that’s just who they see every day. They see the other, so to them family wasn’t the one that looked like them, it was the other.”

Since Angelina has a blood-accessorizing, wild-child past, she wants her kids to be a little edgy:

“…all have a good rebellious streak that is wonderful and curious, and I don’t want them to be perfectly behaved little people that just say what’s absolutely appropriate because I say so or because they think that it’s…they have to find themselves.”

This makes sense since there were rumors that Angelina was the Cool Mom to Brad’s Strict Daddy Angelina wants her kids to be free and wild! …And love her more than they love Brad. “Do you guys wanna drink in the house? Cocaine? I can get you kids cocaine? I bet dad doesn’t let you do cocaine, huh? He just builds shitty houses for poor people.”

There you have it. Angelina Jolie may be a horrible wife who drains the life out of you, but goddamnit can she mother the shit out of those kids. And I guess one way to keep your kids from being perfectly behaved and a little edgy is to give them a complex about their dad not wanting to adopt them.