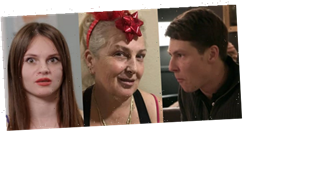 The key to the problem seems to be Brandon, since he can’t stick up for himself or for Julia.

He desperately needs some guidance.

But is he desperate enough to turn to Angela Deem for advice?

90 Day Fiance continues to air full steam ahead on TLC.

However, viewers who subscribe to Discovery+ can stream additional spinoffs, including 90 Day Bares All.

This spinoff, hosted by Shaun Robinson, promises to air footage that could never be shown on TLC — and it’s as good as its word.

In one of its first episodes, Brandon Gibbs is in the hotseat over his controlling mother.

There is a lot to be said about the guy who lets his mother run his entire life. Obviously, Betty Gibbs is the primary villain, but Brandon is not free of fault.

Angela Deem, the polarizing and unforgettable longtime 90 Day Fiance star, popped in as a guest with some advice to offer Brandon.

“Take the t–ty away from the mouth,” Angela bluntly counsels Brandon.

“You have a woman now, you’re going to marry her. Quit being a mama’s boy,” Angela demands.

“This might break your mama’s heart a little bit, trust me, I’m a mom,” Angela, also a grandmother of six, says.

“But in the long run,” she adds, “she’s going to be proud that you stood up and said, ‘Mom I love you but we have to leave this house because I got a wife I’m getting ready to marry and she wants sex three or four times a day.’”

“You just got to realize your c–k belongs to Julia now,” Angela says as only she could.

Angela’s trademark use of diction is just a piece of the not-safe-for-TLC footage shown on Discovery+ this week.

Shaun puts on an outtake from Season 8. Brandon and Julia argue in the car over living arrangements, only to make up.

Make up turns into making out … which leads to Julia going down on Brandon while cameras continue to roll.

Viewing the footage for herself, Angela accuses Brandon of being selfish.

“You didn’t satisfy her!” she accuses. “Poor Julia. Can you imagine?”

“I mean, she probably had to take a shower and hope to God you have one of those shower heads that vibrate, cause if not, she probably isn’t gonna get satisfied,” Angela says.

Brandon gets defensive, insisting that more than that happened and even asking for it to air.

Angela counters with: “I don’t wanna see that s–t!”

That said, a stopped clock is right twice a day, and Angela’s opinion about Betty Gibbs’ ridiculous house rule is right on the money.

”He needs to tell his mom [to] either let them be a couple and have sex, let them stay in the same room,” Angela says.

She continues: “Or let his mom know if he don’t have his own money, he’s gonna need money at least twice a week to rent a hotel.”

Angela says that this is “because he’s got to satisfy the love of his life.”

She adds that this is “because she probably is missing home cause she’s not getting the attention.”

Brandon offers Angela his agreement, and Angela counsels him to “hold on” to Julia, on the grounds that “a  lot of men would love to sex her up.”

Angela has been stunning fans with her body transformation during her weight loss journey.

However, given the way that she has treated Michael Ilesanmi on camera, many fans are leery to take her advice.

She’s right about at least some of this, though — Betty and Ron are too much, and something has to change for Brandon and Julia to save their marriage.